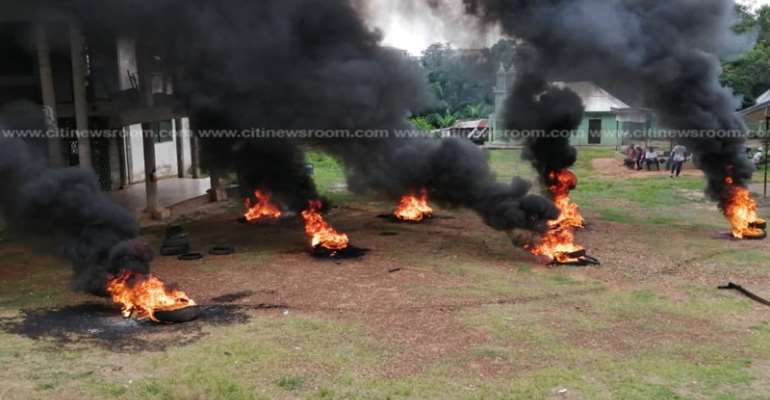 Angry supporters of Massawudu Mubarick, the disqualified parliamentary aspirant in the Asawase Constituency, burned car tyres near the Ashanti Regional National Democratic Congress (NDC) office in protest of the disqualification.

Smoke from the fires, however, engulfed the nearby party office.

The Functional Executive Committee (FEC) of the NDC in a statement last Tuesday disqualified Massawudu Mubarick, clearing the path for incumbent Asawase MP, Muntaka Mohammed ahead of election 2020.

The disqualification followed the recommendation of the party's Committee for settlement of outstanding disputes over the selection of NDC parliamentary candidates for the next general elections.

But the supporters said the protests will continue until the disqualification is reversed.

One of them who spoke to Citi News said he was not surprised at the turn of events.

“We saw it coming from the beginning. All that we are saying is that they should allow the contest to come one because it is like they are forcing Muntanka on us. The delegates are realy agrieved and we are ready to vote skirt and blouse.”

Police arrived on the scene and tried to calm the protestors.

Some NDC members in Asawase earlier filed a petition to the National Executive Council of the party following their inability to file the nomination form of Masawudu Mubarick.

The NDC put in place a conflict resolution committee to resolve the impasse in the constituency.

Latest Photo Reports
Catch up with all the political quotes from our politicians.
Advertise here
More NDC News
ModernGhana Links
2020 polls: 'We didn't go to court over pink sheets' – Former NDC MP
Election 2024; NDC needs a fresh candidate to claw back power - Dela Coffie
Calling on gov't to complete your projects is an endorsement of NPP's 'break the 8' agenda for 2024 — Stephen Atubiga to NDC
Withdraw fraudulent suspension of Salaga South Constituency Executives immediately — Concerned NDC Supporters
‘Give us our harbour or resign for being unfaithful, untruthful’ – Cape Coast NDC tells Akufo-Addo
“Even those who lost elections are thanking people, what are their problems with me inspecting projects?” – Akufo-Addo jabs NDC
We appalled by machiavellian tactics to get MCE nominees confirmed — Western North NDC
2020 polls: We could've also gone on promise spree like NPP – NDC
Tell your family and friends choking the payroll to forfeit their juicy jobs and go into entrepreneurship — NDC’s Basintale
TOP STORIES