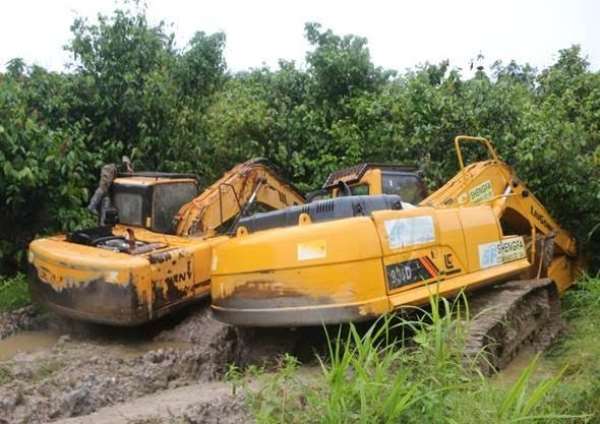 Officials say continued deaths of people in areas where galamsey has taken place due to open pits cannot be allowed to go on.

“Just last week at the Bosome Freho District, a 12-year-old boy fell into one of the pits and died. The open pits pose a threat to the people.

“So I will like to be given some of the excavators to cover the pits and as well de-silt gutters”, he requested.

Mr. Nsenkyire made the request when the Minister of Interior, Ambrose Dery met the officer of NADMO in the Ashanti Region as part of a tour to agencies under the ministry.

Across areas with galamsey activities in Ashanti Region, pits dug illegally were left uncovered when government banned the menace.

A number of people have, as a result, unknowingly fallen into the pits and lost their lives.

It is in only Amansie West District that officials are making efforts to cover them, with local resources.

Mr. Ambrose Dery in response says the request will be thoroughly discussed.

“I have heard your complains about the pits, I will discuss with the Inter-ministerial committee and we will see how best we can allow using the equipment the caused the problem to solve it”, he assured.

Meanwhile, Director General for NADMO, Nana Agyemang Prempeh has assured staff government is working at procuring some vehicles for the Regional and District Offices for the Organisation.

He says the procurement process is underway to get some vehicles for the Organisation.