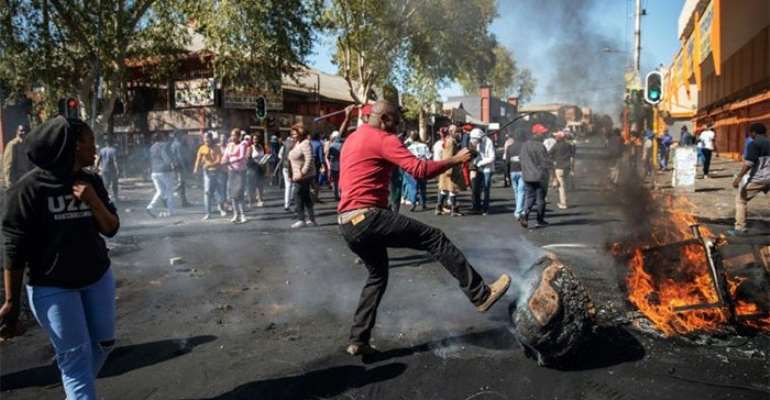 The name South Africa evokes thoughts of xenophobia of the highest order. For the second or so time the blacks of the former apartheid country have engaged in this nasty and inappropriate act of brutality, an indication which by all standards shows that blacks of South Africa have xenophobia etched in their DNA; after all this is not the first time that they are engaging in the brutish act and might not be the last.

Nigeria and Ghana may not equal South Africa in terms of physical indications of modernity and wealth they are anything but xenophobic and uncivilized.

We are appalled, in fact, lost for words in describing the animalistic show put up by black South Africans against Africans from different parts of the continent.

We wonder whether what is unfolding in that beautiful country is occasioned by the long spell of apartheid the blacks endured under the Boers. We are constrained to also think that the Boers after all saw something negative in the South African blacks and thought it wise to adopt and apply segregation as a political system.

The whites we supported our fellow blacks in diverse ways to topple from their position of political supremacy in the mineral-rich country would not have done what the blacks are doing to other Africans were they in their shoes.

Ghana expended so much resources in the fight against apartheid, something the average South African black hardly remembers let alone recognize and revere.

We have taken note of the rather weak verbal intervention the President, Cyril Ramaphosa, is presenting to the world to save the remaining flesh of respectability the country has on its bones from falling off. Claiming that the action is the handiwork of criminals is something we find unconvincing.

A country this resource-endowed with a strong police system should be able to ward off the acts of bestiality being played out by the blacks. Unless the President wants to tell us that crime has overwhelmed his administration. Perhaps that accounts for the country remaining the unrivalled rape land on the continent. A country where rape is taking place every minute and now xenophobia joining the long list of security challenges fall short of passing for a failed state by a few notches.

We condemn in its entirety the xenophobic traits in South Africa and refuse to accept the excuses from officialdom that it is criminals who are perpetuating nonsense.

A top police chief passed comments which rather give credence to our fear that officialdom has sanctioned the nonsense somewhat; whatever is put out on the diplomatic front by the South African government is anything but sincere.

It is in order that both Ghana and Nigeria have done what should be done diplomatically when a country as it were 'gets mad' as South Africa has.

To behold the spectacle of human beings jumping to their certain death to avoid the embers of the fire from a burning storey building because that satisfies the desires of South African blacks is to state the least consistent with life in the animal kingdom.

The equally senseless attack on businesses suspected of being South African in Nigeria is equally in bad state. When the action of senseless human beings leads to such equally stupid reaction it can only be fair when we blame the incident on those who started it all.

So behind the façade of modernity as represented by the mansions built by the whites in Johannesburg, Pretoria, Cape Town and Durban are lunatics, stupid and selfish blacks who could have been better off under apartheid. We could go on and on.