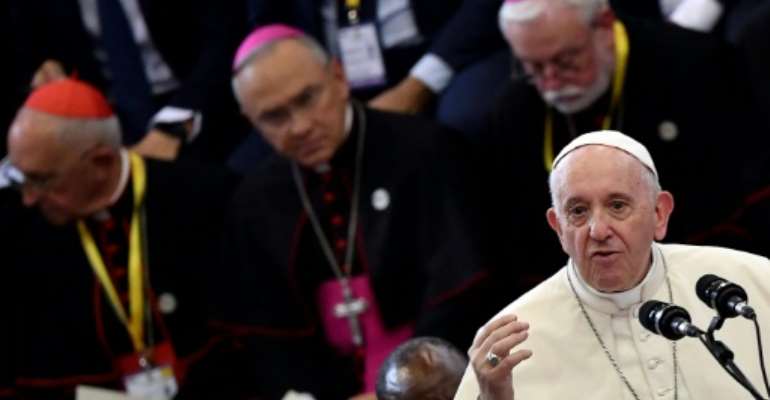 Pope Francis delivered a speech at a cross-religion meeting of young people on the first full day of his Mozambique visit. By Tiziana FABI (AFP)

Pope Francis began the first full day of his visit to Mozambique on Thursday, praising a peace deal between government and rebels and offering solidarity to victims of two devastating cyclones.

His maiden visit to the poor southeast African country comes after the government and the former rebel group Renamo, now the main opposition party, signed a historic treaty.

In talks with President Filipe Nyusi, the pope expressed his "personal gratitude... for the efforts made in recent decades to ensure that peace is once more the norm."

Reconciliation, he said, is "the best path to confront the difficulties and challenges that you face as a nation."

He described the accord as "a landmark that we greet with the hope that it will prove decisive."

The talks at the presidential palace were also attended by Renamo opposition leader Ossufo Momade.

His three-day trip to the disaster-prone country is the first on a tour of three African countries, including Madagascar and Mauritius.

It comes after the country was ravaged two cyclones that killed more than 600 and affected hundreds of thousands.

"I would like my first words of closeness and solidarity to be addressed to all those struck by cyclones Idai and Kenneth, whose devastating effects continue to be felt by so many families," he said.

"I want you to know of my own participation in your anguish and suffering, and the commitment of the Catholic community to respond to this most difficult situation.

"Amid the catastrophe and desolation, I pray that, in God's providence, constant concern will be shown by all those civil and social groups who make people their priority and are in a position to promote the necessary rebuilding".