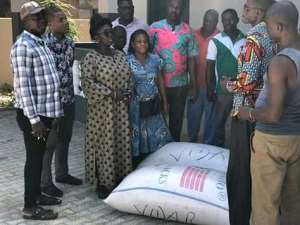 The parliamentary candidate of the opposition National Democratic Congress (NDC), for the Ketu South Constituency, Dzifa Abla Gomashie, has called on government and other relevant stakeholders to take action to end the tidal wave scare.

The former Deputy Minister made the call, when she paid a visit to Adina -a fishing community in the Ketu South Municipality, on Tuesday to ascertain the level of destruction caused by tidal waves to households in the community.

Madam Gomashie who was accompanied by some party executives, interacted with chiefs, opinion leaders and made some donations to affected families and reassured them of her commitment in advocating for a lasting solution to the plights of people living along the coast.

She observed that if drastic measures are not taken to salvage the situation, the sea may end up destroying properties acquired by community folk along the coastal belt, a situation that may worsen their economic conditions.

She called on government to expedite actions to extend the ongoing sea defense project to the affected communities, in order to curtail further destruction of households.

In 2018, at least 1,500 residents in Keta and Ketu South municipalities, particularly Blekusu, were displaced with over 242 houses and properties submerged and destroyed. A good number of boats and nets of the fishers in the area were completely destroyed too.

Chairman of the Parliamentary Committee for Works and Housing, Nana Amoakoh, during an inspection of the 42-kilometre Blekusu to Adina Sea Defence project in April this year, assured residents that the committee would report and recommend to Parliament, to consider starting Phase II of the project to save the situation, following an appeal by the Ketu South MCE, Mr. Elliot Edem Agbenorwu.

Minority investigates impersonation of Adwoa Safo in 2022 bu...
37 minutes ago