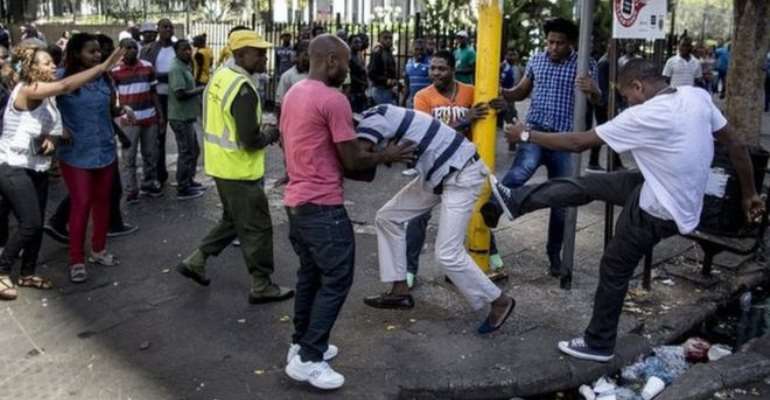 Scores of xenophobic attacks in South Africa currently ongoing in most parts of the Gauteng Province with concentration at the Alexandra township of Johannesburg is not only frightening and worrying, but also very animalistic on the part of the citizens of South Africa perpetrating such heinous acts. This cowardly act for the past few days has lead to looting and destruction of foreign shops and other properties, and also the death of some people.

Note, this barbaric act has continuously and consistently been given breath over the years because of the assumed intentional negligence on the part of the African Union (AU) organization which is perceived to be borne out of either corruption, favouritism, bias or incompetence.

The above view stands because the AU has been observed to be pampering South Africa for the past twenty-five (25) years since the xenophobic attacks started around 1994 in South Africa, despite it being clearly continuously noticed that perpetrators of these barbaric acts have always had the backing and motivation from the political and traditional leaders in South Africa. And note, the perception that the perpetrators of these acts have, and had always had the backing of key leaders of South Africa is held firm by the fact that not even a single perpetrator of the numerous criminal acts numbering around two thousand (2000) which have been committed during xenophobic attacks since 1994, has been prosecuted in South Africa, aside the many unholy utterances by the many South African prominent leaders in defense of the act anytime it had occurred, serving as additional evidence.

As a result, the total blame for the yearly inhumane act on foreigners in South Africa should be placed solely on the head of the AU for the intentional negligence on its part not to pass on any harsh sanctions per the laws governing the African Union membership on South Africa to help deter South Africa and other nations from fueling future xenophobic occurrences in their respective countries. It is particularly sad and worrying that the AU has suddenly lost its power and turned a lame duck when this is not very much different from the civil wars which lead to killings and destruction of properties such as those which happened in Rwanda, Cote D' Ivoire, Sudan and other countries in Africa.

Furthermore, despite there have been wide condemnations from lots of people across the world such as Tiwa Savage, Burnaboy, Bobi Wine, Moussa Faki, Zambian Football Association, Christain Atsu, Ghana High Commission in South Africa, John Mahama, Davido, President Buhari, a huge applause still goes to AKA; South African Singer, Julius Malema; South African Opposition Politician and Ramaphosa; President of South Africa for their boldness to condemn the uncivil acts ongoing in their country, but it would be more pleasing if they could also be found pushing for the harsh prosecution of such perpetrators to serve as deterrence to others in the future.

Xenophobic attacks in South Africa started around 1994, and it has had a yearly occurrence since then till this year. The year which has had the highest casualties is 2008 followed by 2015 and then 2017. 2008 alone recorded about sixty-eight (68) deaths.

Violence are mostly high in the large cities. Gauteng Province has had the highest level of xenophobic attacks followed by Western Cape and KwaZulu-Natal. Gauteng Province has its cities like Johannesburg and Pretoria being the most hardly hit while that of KwaZulu-Natal has Durban mostly hardly hit by such attacks. The basic complaints by South Africans which is noted for leading to these xenophobic attacks have been; immigrants taking their jobs and social benefits, and also being a burden on their country's economy.