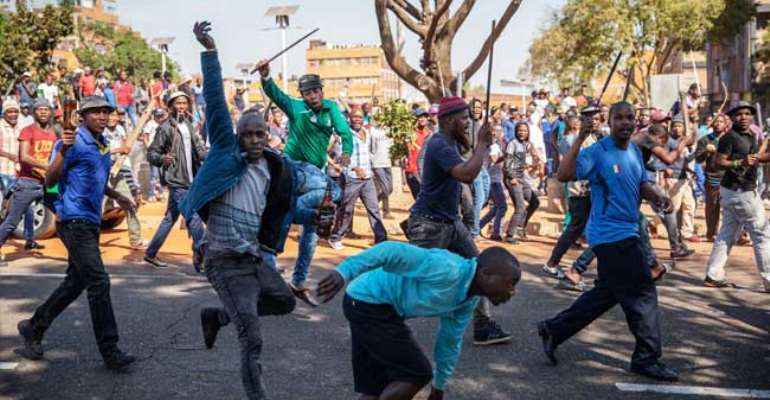 Members of the Ghanaian community in South Africa say they are living in constant fear as renewed xenophobic attacks on Nigerian nationals worsen in the capital, Pretoria.

According to them, though various governments have raised concerns and appealed to the South African government to intervene in the situation, security measures are weak.

Speaking to Citi News, a member of the Ghana community living in South Africa, Raymond Kiss called on the Ghana's High Commissioner to South Africa, George Ayisi-Boateng to be more proactive in dealing with the situation.

“The current situation is very horrifying because they are claiming; they have taken their jobs more especially in the peddling of drugs. So, they are saying we are pushing and selling drugs and destroying the country. These attacks are just personal. Even their leaders care less about it and you can see that not even the President has spoken about it. We have spoken deeply about these attacks in the past and everybody is keeping quiet about it. It’s like rules and laws don’t work in South Africa. The Nigerians are the main ones being targeted but it transcends to Ghanaians because we are closer to them. “

He added: “the Ambassador wasn’t able to say anything touching we can relate to. All that he could say os that we should take good care of ourselves and hide in our rooms. What we expect from an Ambassador is that he will be conferring with the President and other leaders on what can be done.”

The Foreign Affairs Ministry has stated that there are no “confirmed Ghanaian casualties” from the on-going xenophobic attacks in South Africa.

The government in a statement assured the Ghanaian public that, Ghana's High Commission in South Africa is working assiduously to ensure Ghanaians living in that country are free from attacks .

Ghana's Foreign Affairs Ministry also added that any new development will be communicated accordingly to Ghanaians.

“The Government of Ghana wishes to assure the Ghanaian public that there are no confirmed Ghanaian casualties at the moment. Our high Commission in Pretoria is monitoring the situation closely and any new development will be communicated accordingly,” the statement added.

Ghana's High Commissioner to South Africa, George Ayisi-Boateng, also urged Ghanaians resident in the country to be cautious amid the unrest.