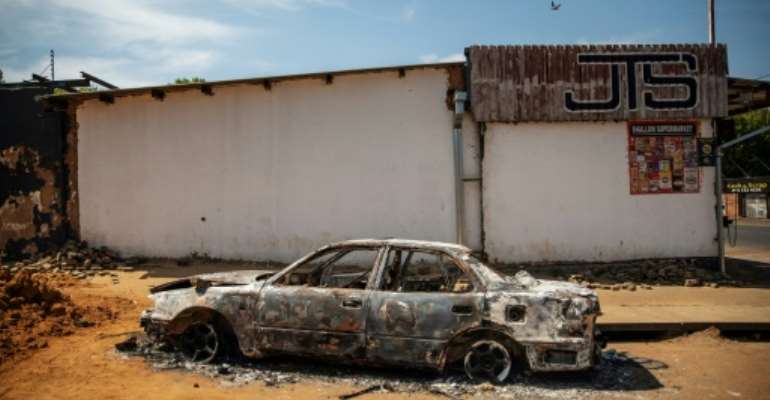 Paul Dihi treads cautiously through the charred carcass of his two-story shop building, taking a heartbreaking tally of the destruction wrought by xenophobic violence that raged through parts of South Africa in recent days.

Dihi, who rented space to shopkeepers from Nigeria, South Africa and Zimbabwe among others, said he received a late night call from a tenant telling him his property was ablaze, as mobs descended on foreign-owned shops and businesses in Johannesburg's eastern suburb of Malvern late Sunday.

"Around 2 a.m. one of the tenants who was standing outside called me to say there was a fire in my building," said Dihi, who migrated from Ivory Coast in 1996.

The firebrigade did not arrive for some five hours.

By then "my building was in flames, in ashes", said Dihi, debris strewn at his feet. 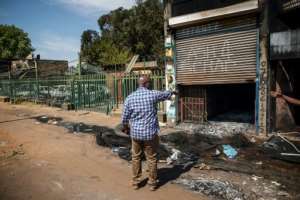 Paul Dihi, who migrated from Ivory Coast in 1996, earned most of his income from the building he rented out to shopkeepers. By Michele Spatari (AFP)

The 51-year-old relied on the building as his main source of income, but he said he did not blame those behind the violence.

"I blame the government," he said.

The unrest in Malvern was part of a wave of xenophobic violence that unfurled through South Africa's Gauteng province and other parts of the country this week, killing at least seven people and leaving scores of businesses in ruins.

Violence against foreigners has a long history in South Africa, where many scapegoat immigrants for the lack of job opportunities, particularly in manual labour. 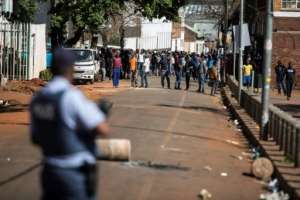 A wave of xenophobic violence swept parts of South Africa this week. By GUILLEM SARTORIO (AFP)

Joblessness reached a record 29 percent this year, with more than 50 percent unemployment amongst youth.

But the continent's most industrialised economy is a major destination for workers from neighbouring Lesotho, Mozambique and Zimbabwe.

Others also come from further afield, including South Asia and Nigeria -- the most populous country in Africa.

Dihi has seen xenophobic unrest before but never on this scale. He has had enough.

"I want to fix up the building, sell it and move back to my country," he said.

Across the road, an entire family has gone out of business. 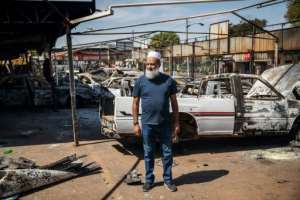 South African car dealership owner Yunus Salajee, outside the remains of the vehicles destroyed in the unrest. By Michele Spatari (AFP)

All but two of Salbro Auto's 35 cars were either stolen or torched by looters as they plundered their way down Jules Street, overpowering the police.

"It's big money," said Abdallah Salajee, who recently took over the car dealership from his father. "We had no insurance. We have to start from scratch."

Originally from India, the Salajees have been in the country since the 1980s. 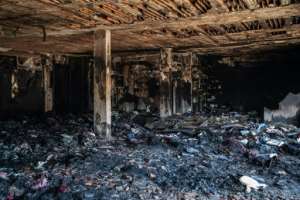 Other businesses have been completely gutted. By Michele Spatari (AFP)

"We are local South African people," said Salajee. "What did they gain from doing this?"

A semblance of calm returned to Johannesburg on Wednesday after police dispersed protesters and beefed up patrols in the area.

A total of 289 people have been arrested since Sunday.

In Malvern, men in tattered clothing crowded around torched car remains, desperately tugging for scraps of metal to sell.

'We have to do business'

Just a few minutes by car from the glitzy malls of Johannesburg's affluent Sandton area women picked up vegetable scraps strewn around after the looting. 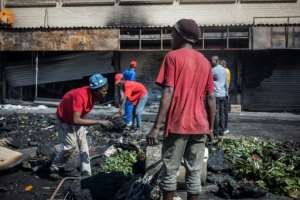 Shops were also looted in the impoverished township of Alexandra. By Michele Spatari (AFP)

In the impoverished township of Alexandra most businesses remained closed on Wednesday, fearing a another wave of violence.

South African shopkeeper Enver Lombard was one of the few to re-open after hiding his stock overnight.

"We came in at about 4 o'clock (in the morning) and brought back the stuff from the storeroom because we have to do business," said Lombard, 80, surrounded by assorted DVD players, CDs and baskets.

But he said he understood the roots of the unrest.

"The problem is that they (foreigners) have taken away their businesses," he said.