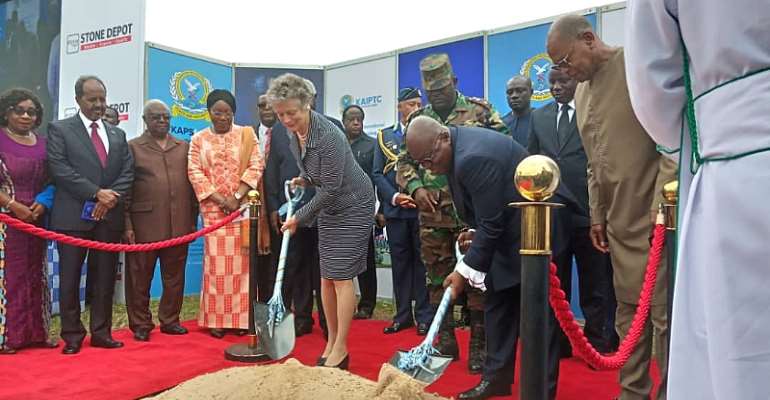 President Akufo-Addo together with eight other Former Head of States have today cut sod for the construction of a statue in memory of the late United Nation’s General Secretary, Kofi Annan at the Kofi Annan International Peacekeeping Training Centre (KAIPTC) in Accra.

According to the President, the late Kofi Annan was a man of principle who valued important concepts of life and lived according to those values.

Speaking at the sod cutting ceremony at the Kofi Annan International Peacekeeping Training Centre (KAIPTC), Akufo-Addo said “I am very privileged to cut the sod for the commencement of this monument in honour of one of the most illustrious of our compatriots. There is not too much that can be said about his life that has not been said. But for me, will I see or remember, is a man of principle; a man who valued important concepts of life and who lived his life according to those values. The very few of us, who can claim that but he did it and that is why a grateful posterity has found it necessary to honour him.”

He urged the gathering to live lives worth emulating for others to follow suit.

“I am very happy that I have the opportunity today to make this contribution to the perpetuation of his memory. I am hoping that when the monument when completed, will enable his widow to be able to continue to communicate, " he stated.

Chairman of the KAIPTC Governing Board, Hon. Dominic Nitiwul noted that after establishing the centre 21 years ago, it has continued in ensuring Ghana’s long experience in international peace support operations, provided capacity development as well as supported Regional and International Peace Initiatives.

He continued, “In line with the proverbial mindset of Ghanaians, Government framed the mandate of the KAIPTC within the context of our Global Iconic image of the late Kofi Annan, a world’s state man who dedicated his life to the course of global peace and security. Over the years, KAIPTC has continued to build on its strengthen, research and its training as well as leveraging in assembling Regional and International peace and security.”

Presenting the concept of the monument, Deputy Director, Engineer Service, Lt. Col A.B Tekyi disclosed that out of the three posture designs submitted for consideration, only one was approved by the Management of KAIPTC.

“This design was unique in itself as it portrayed the gentle, quiet and soft spoken subject in one of his many poses. The difficulty was whether to show him in a static pose or mobile with many gestures or a mobile with one gesture, " he emphasised.

Me. Tekyi disclosed that the statue to be built is a 20 foot height which has been chosen to achieve a purpose of a towering statue at the entrance of the KAIPTC.

“Strategically, it will be placed close to the boundary fence and the road for all to see and appreciate Ghana’s International Peace Diplomat on a giant scale. Haven decided on the concept, size and location, the statue will be built with materials that can withstand the sea and the salt. A number of materials were considered and finally, stone was chosen. The statue will be produced in a grey ornamental stone marble known as seria unvereal. This stone is original, hardwearing, durable and water resistant and can withstand the weather,” he stated.

He further mentioned that the statue will measure an 18 foot with a pedestal of 2 foot totaling, 20 foot tall; a width of 6 foot and a thickness of 5 foot weighing 21 tons.

“I think we have to focus on the gratitude for having spent so many years with him and being part of his vision as well as hope for a better world. I love that photography. You can see the optimism and his vision of wanting to make life better and also creating more peaceful and fair world for all.

She further expressed the family’s gratitude to the Government of Ghana and Ghanaians for their support and thoughts as well as embracing them throughout the difficult year.