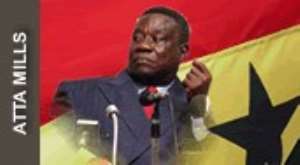 MILLS IS STILL NDC'S CHOICE ..leaves John Mahama, Mahama Iddrisu, Bagbin, Kumbour, Spio far behind. No mention of Mrs. Rawlings in report THE TWICE defeated presidential candidate of the opposition National Democratic Congress (NDC), Prof. John Evans Atta Mills, is still better placed to get the approval of party delegates to stage a third time bid in his attempt to become the president of the nation, a survey report has revealed. The survey, conducted by a group christened, NEW AGENDA-2008.ORG, which describes itself as an independent political think tank but believed to be within the NDC's intelligence and research units, showed that the law professor was still considered by most decision-makers of the party as the best presidential material for it.

The research, said to have been conducted by the group during the party's recent controversial congress held in Koforidua, with its report obtained exclusively by The Chronicle, sampled the views of 449 delegates who constituted 28% of the total delegates at the congress.

With a list of possible presidential candidates of the party provided on a questionnaire and a set of leadership criteria spelt out to form the basis of opinion among delegates, the respondents were asked to select, in order of preference, three of the candidates who were likely to be the flag bearer of the party.

The people who were captured as the potential presidential candidates of the party included Prof. Mills, Vice President in the second term of the NDC government and two time loser, Alhaji Mahama Iddrisu, Minister of Defence in the NDC regime, who lost the party's chairmanship position to Dr. Obed Asamoah in 2002 and has again indicated his intention to vie for the flag bearer position.

Others were Nana Konadu Agyemang Rawlings, former first lady and wife of party founder, Jerry Rawlings, Hanna Tetteh-Kpodah, a former Member of Parliament (MP) for Awutu Afutu Senya, and Dr. Ekow Spio-Garbra, Minister of Education at the time of the NDC and now Chief Executive Officer of the Commonwealth Telecommunication Organization.

Out of the total of 803 responses from the 449 delegates, Prof. Mills obtained 343 votes, followed by John Mahama who got 135 votes. Spio-Garbrah placed third, obtaining 93 votes with the good old Mahama Iddrisu following with 50 votes.

Dr. Kumbour, Dr. Botchwey and Hon. Bagbin had 37, 19 and 14 votes respectively. Interestingly and surprisingly, the survey report did not capture the performance of the former first lady but it is believed that her performance might have been so dismal that putting it out would have demeaned her, considering her position as an influential figure in the party.

The report indicated that delegates whose views were sought made revealing comments about the strengths and weaknesses of Prof. Mills, John Mahama, and Mahama Iddrisu.

For Prof Mills, his plus factors were that he was the most well known among all potential candidates, which therefore gave him the advantage of marketability. Most of the respondents also thought that he was intelligent, peace-loving and had been around to support the party all this while.

The weak points of the law professor were that he had been marketed enough since 1996 when he was the Vice President and the fact that he had lost in two presidential elections, which meant that he was not a winnable candidate and for that matter the party needed a fresh candidate.

He was also accused of not being forceful enough to fight to the bitter end. “They cite the example of the 2004 presidential elections in which results of five constituencies in the Northern and Brong Ahafo regions were not collated by the Electoral Commission, yet Prof. Mills accepted those results without contesting them,” the report said.

His consistently poor performance in the Central region, his home region, was surprisingly not identified as one of his weakness in the report. The NDC flag bearer performed abysmally in his home region in all the elections.

Most of the respondents thought that John Mahama possessed a good deal of general popularity, acceptability and a friendly character that made him a good candidate.

There were, however, concerns that he was not very firm, decisive and authoritative enough.

Some of the respondents also said that the Bole-Bamboi legislator did not come across as a strong leader.

For Alhaji Mahama, the report suggested that he might have performed below expectation due to what it described as “his poor use of the media” and his advanced age.

The report noted that the Alhaji will be about 70 by 2008 and so will not be a strong enough candidate to compete with a likely energetic candidate of the ruling party.

With the opportunity for the respondents to also point out other persons they considered to be good presidential materials for the party apart from those mentioned in the questionnaire, a few respondents were said to have identified Mr. P. V. Obeng, a one time presidential advisor and Dr. Mohammed Ibn Chambas, the Executive Secretary of ECOWAS.