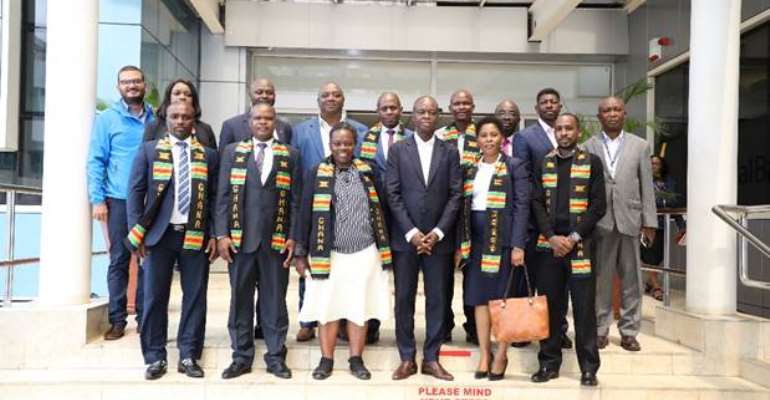 Participants and some NCA Management Staff in a group picture

Accra, September 2, 2019: The National Communications Authority (NCA) has commenced the first ever training programme on Conformance and Interoperability Testing for members of the International Telecommunications Union (ITU) within the African Region. The training programme which started on 2nd September, 2019 is expected to end on 6th September, 2019 and is designed to build capacity for Regulators on regulatory framework and practical Specific Absorption Rate (SAR), Radio Frequency (RF), and Electromagnetic Fields (EMF) tests as well as the creation of basic lab facilities.

Conformance testing is to determine whether an electronic communications equipment meets specific standards, while Interoperability testing measures if two or more equipment can work with each other.

The training programme, which is being co-sponsored by the ITU, drew participants from over ten (10) English speaking countries including Somalia, Tanzania, Uganda, Malawi and South Sudan.

·The Director General of the NCA, Mr. Joe Anokye welcoming participants to the training programme.

The Director General of the NCA, Mr. Joe Anokye, in his welcome address noted the importance of the training as being vital in the work of telecom regulation. He pointed out that investing in a new-age and state of the art regulatory tools to check compliance and ensure consumer protection is a conscious effort on the part of Regulators to enhance regulatory practices.

In her response, Ms. Chali Tumelo a representative from the ITU Regional Office for Africa , said due to the importance of conformance and interoperability testing in the global telecommunication landscape, the ITU supports efforts of member states by implementing capacity building programmes on that subject matter. She expressed her excitement with NCA’s establishment as it shows that the ITU’s effort had yielded results. Ms. Tumelo stated that the African Regions training programmes had always been organised in Tunisia and that Ghana’s foray into Conformance and Interoperability Testing had come at the right time to help the ITU support other member state in this area.

·Ms. Chali Tumelo, a representative from the ITU Regional Office for Africa giving her remarks.

She encouraged other African countries to follow Ghana’s footsteps. This she said will support ITU’s objective of establishing Conformance and Interoperability labs in the Central, Eastern, and Southern Africa.

The NCA launched its Type Approval Laboratories in July 2018. Following that, the Authority was approached by the ITU to use the said laboratories as a testing and training hub for other ITU member countries in Africa.

·Participants and some NCA Management Staff in a group picture.

The Authority has three labs for testing equipment;

·Specific Absorption Rate (SAR) Lab where testing is done to ensure that wireless transmitting devices (mobile phones, laptops, tablets, etc.) do not emit more radiation than required and are safe for human use.

·Radio Frequenc y Lab, where testing aims to check the functioning of equipment within their electromagnetic environment. Signaling testing is conducted to ensure that the equipment function as required under different multiple access technologies.