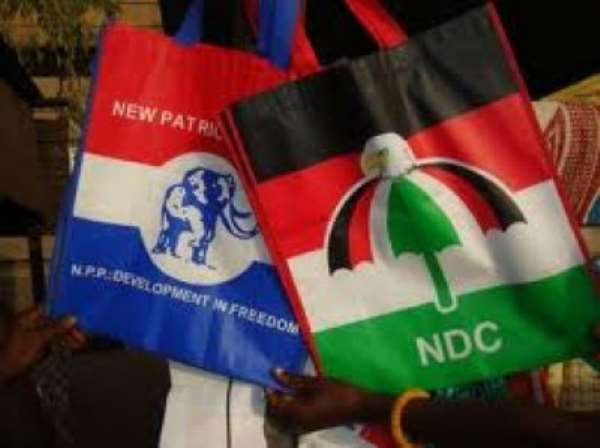 Your average Ghanaian politician will boldly tell you - when asked - that he or she is in politics, to promote the welfare of ordinary people, and help build a more prosperous society in Ghana. If so, then the question we must ponder over is: Why, when in the political wilderness, do opposition politicians often act as if they want the nation-building effort to stall - and ultimately fail, so as to enable them ride to power again, on the wave of public dissatisfaction with the government of the day?

Clearly, the miasma of negativity deliberately spread by opposition parties, and designed to envelope the nation in gloom, is meant to lead to a loss of confidence in the policies of current-day administrations, formed by ruling parties. It is an outrageous and intolerable situation that Ghanaian society must no longer tolerate. Full stop. The never ending boot-for-boot-equalisation politricks-propaganda must cease forthwith.

Both entities making up the NPP/NDC duopoly that have dominated our nation's politics, since the 4th Republic came into being, after the promulgation of the 1992 Constitution, are guilty of this backward, nation-wrecking egregious-pariochialism, slowly destroying our country. They must both bow down their heads in shame for tormenting ordinary people in such crass and cynical fashion.

Without question, it is this covert use of destructive-tactical-politricks, by extremists and hardliners in the opposition National Democratic Congress (NDC), today, which has created the tension now being experienced in the country that, alas, is making many Ghanaians feel that their nation is in crisis, and that their own future and personal security, are somehow also under threat.

Yet, in reality, the plain truth is that by and large, ours is a mostly-peaceful and stable African society. And, as he promised, President Akufo-Addo is indeed laying the foundation for a prosperous society - through bold initiatives such as: access for all who qualify for free senior high school education; agric sector wealth creation by planting for food and jobs; and import substitution industrialisation using the 1-district-1-factory policy.

The reforms needed to transform any society successfully, are, by definition, invariably painful initially; but they do eventually lead to prosperity. And, whether it is the NPP or NDC that is in power at any given moment in our history, transforming Ghana is a huge task, which will take at least ten years to bear fruit. No political party in Ghana must think that it is entitled to rule Ghana for decades on the trot. That is for the good people of Ghana to decide - which is why the NPP/NDC duopoly's hardline and exremist politicians must stop disrespecting the Ghanaian people. Haaba.