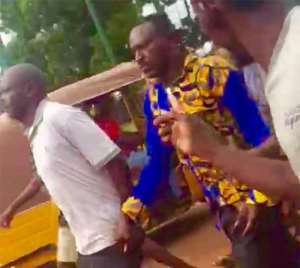 Residents of Sabonjida , a suburb of Tamale in the Northern Region, have nabbed a suspected kidnapper in the area.

The suspect, one Ibrahim Kassim, 38, was arrested when he allegedly tried to kidnap a 5-year old girl, from Hariya Primary, an Arabic school in the area.

An eyewitness, Baba Fuseini , a teacher at Hariya Arabic school told DGN Online , that he spotted the suspect talking to the victim but became suspicious when he moved from the little girl and came back the second time.

According to him, he questioned the little girl if she knew the suspect but she said no.

He said suspect started moving away from the scene but he followed up and questioned the suspect and immediately he started running.

“I started shouting thief then the neighbors around came out and we gave the suspect a hot chase and arrested him,” he narrated.

Mr. Fuseini stated that residents wanted to kill the suspect on the spot but some persons pleaded to send him to the police station and they obliged.

Meanwhile, a search conducted on the suspect revealed two bus tickets in his pocket.

The destination for the tickets was Accra.

Residents told DGN Online that this was the second time a suspected kidnapper has been chased in the area.

The Northern Regional Public Relations Officer, DSP Mohammed Yussif Tanko, who confirmed the arrest to DGN Online, said investigation was ongoing but was quick to add that preliminary investigation revealed that the suspect did not move the victim from the location.