Mahama to fix the Economic Mess 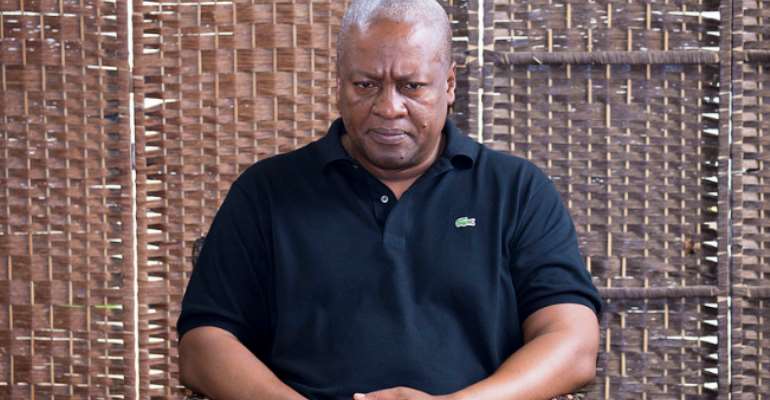 Quite interesting, the irony of former President Mahama claiming that the NPP government under His Excellency Nana Addo Dankwa Akufo-Addo has created exceedingly economic mess warranting his (Mahama) comeback to fix it. As if that assertion was not shameful enough to compel him and his supporting NDC faithful to retreat into their lair to brood over the pain of their election 2016 loss, the minority NDC caucus in Parliament has issued a statement calling for NPP MPs to refund the money they borrowed from the collapsed banks for their 2016 political campaign.

The sarcasm of the attitudes of former President Mahama and the NDC MPs in parliament has annoyed me so much so that I have to put out this publication. I do not support any form of corruption perpetrated by any public official let alone, by politicians. Unfortunately, Ghanaian politicians in Ghana have come to see politics as an arena for making quick buck at the crack of their fingers. Subsequently, they have devised every means possible to embezzle funds and State properties to the detriment of the collective welfare of Ghanaians. No wonder that some Ghanaians are silently expressing the view of having a second house cleaning of the political arena of rogue politicians as done in 1979 by the Armed Forces Revolutionary Council (AFRC) military junta headed by Flt. Lt. Jerry John Rawlings. Their stealing spree with impunity should not be allowed to continue to become an acceptable order of the day.

Former President Mahama is himself the mess. I can put it to him without fear that he has stolen from the nation more than any other living Ghanaian or any president of Ghana whether dead or alive. Can he dispute this accusation when indicted for gargantuan corruption and dragged before the court of God? I know before the court of Ghana, he will deny it and will get corrupt lawyers to defend him with a corrupt judge pronouncing a favourable verdict for him. Nonetheless, it will be a different ball game in the court of God where true justice will prevail with honest judgment delivered without fear or favour.

It is only a fool and a mentally deranged person who never knew the scale of corruption, lawlessness, nepotism and practice of selective justice that went on under the administration of former President Mahama. This person of a pot calling the kettle you are black has the shameless audacity to point an accusing finger at President Nana Akufo-Addo for causing economic mess in the country which requires that he comes back to clean it up.

Has former President Mahama forgotten how most of the government organizations he created embezzled funds – from rearing guinea fowls that flew to Burkina Faso to return no more to the planting of trees in the northern Savannah regions in the dry season only to have all the trees or seedlings withered? Lest I forget, the bus branding that cost millions of Ghana Cedis whereas the actual cost was about a tenth of the officially certified cost? This is the thief claiming to come back to clean the economic mess by the NPP government.

I would have had no qualms about it if he had said he was coming back to clean up the coffers of every pesewa because he could not finish emptying the coffers totally before he was kicked out of power on Wednesday, 7 December 2016.

Going back to the NDC Members of Parliament, yes, they are right to ask NPP Members of Parliament to refund every money they borrowed from the banks that partly contributed to the banks collapsing. However, my question to them is, did no MP from the NDC borrow from any of the collapsed banks? If any of the NDC MP did, and has not yet paid up, why were they not fair or honest enough to include them in the persons that borrowed money from the banks, the non refund of which money contributed to the financial distress suffered by the affected banks and finally culminated in their collapse?

Additionally, why did they not include the younger half-sibling of former President Mahama? Did they not know that he took a loan of US$58 million or GHS58 million from the Merchant Bank and never paid back? Did they not know that his failure to honour his loan obligations partly contributed to the demise of Merchant Bank? Also, the same person took a loan of GHS302 million from the UT Bank and never paid it back. His failure to pay back the loan that was acquired without following proper traditional banking procedures, immensely contributed to the insolvency of the bank hence being consolidated along with others.

Was it not this same guy who was clearing his imported goods from the country's ports issuing dud cheques? For the NDC MPs failing to ask him to refund the money he had borrowed from the banks which somehow compounded the dearth of the banks' liquidity assets hence resulting in their collapse, the MPs could be accused of hypocrisy, nepotism and utter insanity. He is the most singular person in Ghana who has used his brains criminally, and his affiliation with some politicians, especially his brother (former President Mahama), to dupe the nation of such massive sums of money. Even Alfred Agbesi Woyome, the renowned Ghanaian swindler, pales to nothing when it comes to contesting with the former President's brother in swindling. Why did the NDC MPs not ask him to refund the money he had so borrowed?

These are the people we have sitting in Parliament making laws for us. Nonsense!

Have some of these same NDC MPs in parliament not taken double salary but the Special Prosecutor for unknown reasons is refusing to investigate and prosecute them? What a double standard!!!

I shall shed no tears for any corrupt politician should there ever happen to be a house cleaning of some sort. They are a disgrace to mother Ghana and the wombs that conceived them.

Mr "Ye ntie obiaa" former President, please do as Matthew 7:5 tells hypocrites noting that you are a Christian and a member of the Baptist Church headed by my former Kumawu Tweneboa Kodua Secondary School senior, now Pastor Agyei Danso. It says, "Thou hypocrite, first cast out the beam out of thine own eye; and then shalt thou see clearly to cast out the mote out of thy brother's eye"

Let former President Mahama and NDC MPs learn something from the song by Jimmy Cliff in case they would be a bit wiser and come out clean.