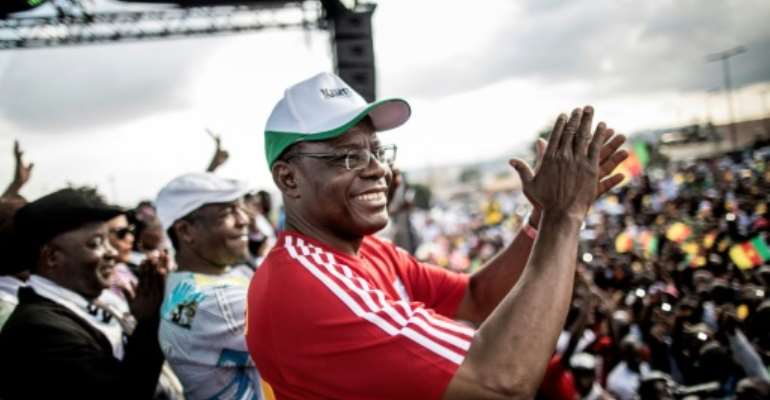 Maurice Kamto, leader of the Cameroonian opposition party Movement for the Rebirth of Cameroon (MRC), believe he was robbed of victory in last year's presidential election. By MARCO LONGARI (AFP)

Cameroon's main opposition leader Maurice Kamto, the runner-up in last year's presidential election, goes on trial Friday in a military court accused of insurrection, despite a chorus of international protest.

Kamto, together with several dozen of his political allies and supporters, faces charges of insurrection, hostility to the motherland and rebellion, crimes which, in theory at least, could carry the death penalty.

The trial goes ahead despite repeated protests from France, the United States and the European Union, who have been calling for his release from detention for eight months.

Kamto, the head of the opposition Movement for the Rebirth of Cameroon (MRC), and about 100 party supporters were arrested in late January.

The arrests came after several months of peaceful MRC protests over the October 2018 presidential election, which they say was rigged in favour of President Paul Biya, who has been in power for 36 years.

The crackdown on the opposition caused outrage among rights groups and many western governments.

Later the same month, European Union foreign policy chief Federica Mogherini criticised the arrests and what she called the military court's "disproportionate" proceedings against them.

International rights groups have also condemned the action against Kamto and his colleagues, calling for their release.

For Human Rights Watch, the arrests "appear to be a politically motivated move to curtail dissent". What had happened so far called into question their chances of a fair trial.

France reacted in May, calling for the release of those arrested.

On Monday, just days ahead of their trial, Biya and his fellow defendants said they were determined to get the truth out in court.

In a letter Monday to the head of the court in Yaounde, they called for full access to the court for the press and public throughout the trial.

His legal team have submitted a list of 31 witnesses to the court, including two ministers, the chief of police and other senior officers in both the police and the army.

The authorities in Cameroon dismiss claims from the defendants and others that this a political trial designed to "decapitate" the opposition MRC.

The MRC had adopted a logic of "provocation and planning for insurrection", said junior interior minister Paul Atanga Nji.