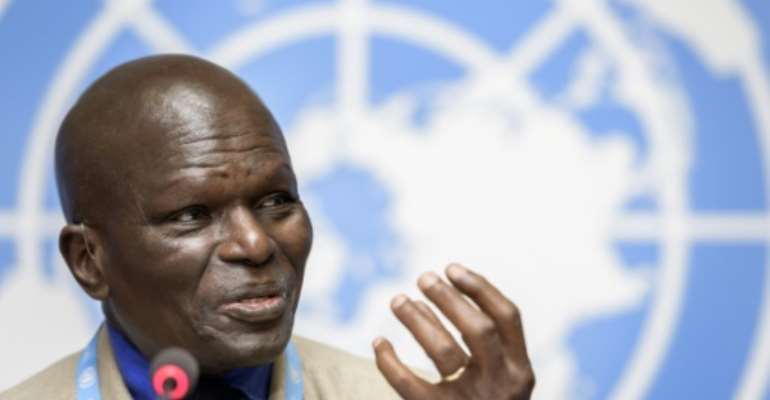 The head of the UN Commission of Inquiry on Burundi, Doudou Diene, said that it was "extremely dangerous to speak out critically" in the country. By FABRICE COFFRINI (AFP)

A climate of fear has gripped Burundi ahead of next year's elections, with crimes against humanity and other serious violations continuing with impunity, UN investigators said Wednesday.

In a new report, the UN Commission of Inquiry on Burundi said local authorities and the ruling party's youth league, the Imbonerakure, were committing gross rights abuses to intimidate people into joining and supporting the ruling party in the run-up to 2020 elections.

And it said that warning signals for the risk of atrocities were once again evident in the country.

"The commission found that the eight common risk factors for criminal atrocities are present in Burundi," it said, insisting that "the evolving situation must be monitored with the greatest vigilance."

Burundi has been in crisis since 2015, when President Pierre Nkurunziza ran for a third term and was re-elected in a vote boycotted by most of the opposition.

At least 1,200 people were killed and more than 400,000 displaced in violence between April 2015 and May 2017 the UN says was mostly carried out by state security forces.

But in a surprise development, Nkurunziza announced last year that he would not stand for election in 2020, confounding critics who accused him of working to extend his grip on power.

Yet the ruling party has shown no indication it is ready to relinquish power.

The UN investigators said that a "climate of fear" prevailed throughout Burundi, with the stifling of all critical voices creating an "illusion of calm".

"It is extremely dangerous to speak out critically in Burundi today," commission chief Doudou Diene said in the statement.

The Imbonerakure especially have carried out killings, disappearances, arbitrary arrests and detentions, acts of torture and rape against actual or alleged political opposition members, the investigators said.

"Women and girls are gang raped by Imbonerakure during attacks of their homes or while trying to flee the country," they said, accusing Burundi's intelligence service of using sexual torture against men and women in detention.

"This alarming violence is fuelled by the widespread impunity that prevails in Burundi," they said.

Violations, they said, were happening with virtually no scrutiny in Burundi, where media and civil society face severe restrictions, the justice system is "dysfunctional", and in March, Burundi shut down the UN human rights office in Bujumbura.

In light of the dire lack of oversight in the country, the investigators said it was vital they be allowed to continue their work.

They will present their report on September 17 to the UN Human Rights Council, which will determine if their mandate will be renewed.

The investigators have not been given access to Burundi, but said they based their findings on more than 1,200 statements from victims, witnesses, alleged perpetrators and other sources.

We’re Investing Massively In Infrastructure; Not Rearing Fly...
11 minutes ago

Mahama Shakes Tarkwa As Menzgold Customers Give Him Rousing ...
11 minutes ago