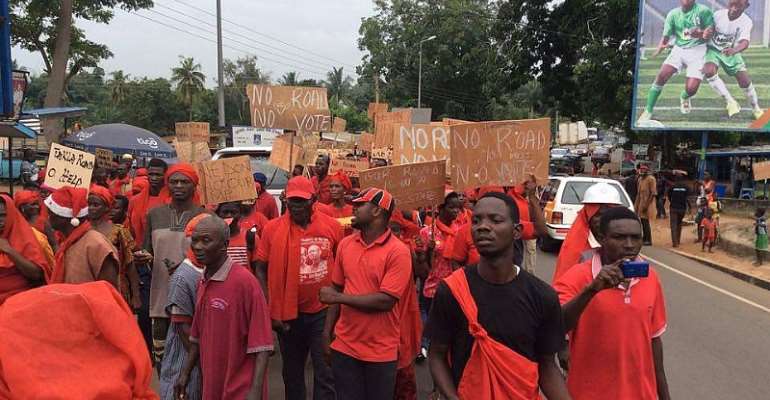 Some residents of the Volta Region have issued a two-week ultimatum to the NPP government to fix all the deplorable roads in the region or face their wrath.

The group which is trumpeting a campaign dubbed 'Fix Volta Roads Now,' say the bad nature of roads in the region had increased the number of vehicular accidents, reduced tourist sites patronage among others.

In an interview with Citi News, convener of the group, Dr. Makafui Dzakpasu stressed there will be series of demonstrations if work does not begin and continue on the deplorable roads before or on 15th September this year.

“On the 15th of September, which is in two weeks, based on what government has promised, we hope to see the contractors back on site and that is what we are waiting for peacefully.”

Some infrastructural projects including roads in the region seem to be abandoned.

These projects include the eastern corridor road, a dual carriage road from Sokode to the regional capital Ho, the University of Health and Allied Sciences (UHAS) by-pass to join Ho-Aflao highway, among others.

President Nana Akufo -Addo during his tour of the region promised to fix these roads.

“During the third quarter of this year- from July to September, you will reap the benefits of my visit. You will notice that the roads will be fixed during that period,” said the President.

A few months ago, the Minister for Roads and Highway, Mr. Kwasi Amoako-Atta also announced that government is working to ensure that the entire stretch of the Eastern Corridor road is completed by the end of Nana Akufo-Addo's first term.

He said, there was going to be “a renewed effort that will be sustained to work on the Eastern Corridor.”

“It is the determination of His Excellency, the President, that by the end of the first term, the entire stretch of the Eastern Corridor will see the light of day, and I want to assure that it is receiving the attention of the government.”

The group in a petition to the President demanded the fixing of the following roads: 1. Asikuma To Jasikan Road