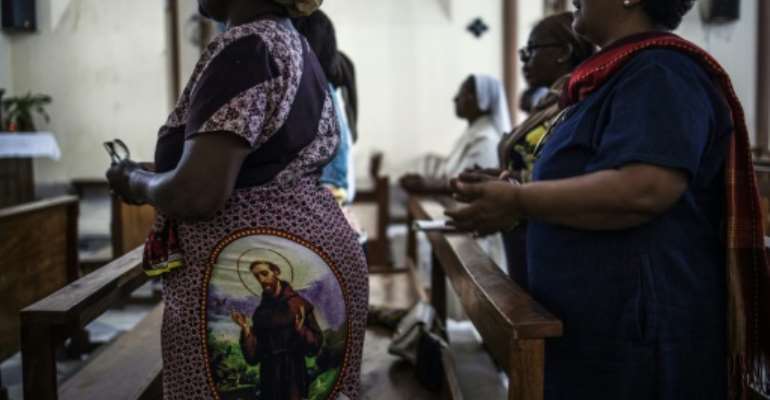 Worshippers pray in Beira's Our Lady of the Rosary Cathedral before Pope Francis visits Mozambique. One woman wears an image of St. Francis of Assisi on her traditional dress. By MARCO LONGARI (AFP/File)

Maria da Paz prays silently on a pew near the altar of Beira cathedral. Tonight, as on many other nights, she wants to give thanks for simply being alive.

The 49-year-old fervent Catholic frequently gives thanks to God -- and today she says she included Pope Francis in her prayers.

The pontiff is expected to arrive in the capital Maputo, about 720 kilometres (450 miles) north of Beira, on Wednesday.

"Idai completely destroyed the roof of my building. I live on the top floor, so you can just imagine!" Maria says.

"But I thank God for letting me live safely, letting me be here to bear witness. Some did not have that luck."

The announcement that Pope Francis would visit Mozambique, where 56 percent of the population are Christians according to the latest census, raised hopes among the cyclone victims that Beira would be on his itinerary.

The ravages of Cyclone Idai are still very apparent in Beira six months after the storm raged over the port city. By WIKUS DE WET (AFP/File)

"I know that even from Maputo, the pope will have a word for all of us who have suffered."

Six months after the disaster, the streets of are dry and dusty again, but storm damage is everywhere.

Lamp posts are bent, telephone cables trail along the ground and the roof of the cathedral Our Lady of the Rosary is covered with tarpaulins in a riot of colours.

'Washed it all away'

In March, Fernando Castigo Matambuje saw his home swallowed up in the floods that came in the cyclone's wake, even though the house lay 80 kilometres (50 miles) inland.

"My family lost everything. Our house first, but also a pump, hoses, our harvest, our chickens and ducks -- the water washed it all away," the farmer said.

Technicians from the Catholic NGO Caritas helped farmers tend crops in a new start after the cyclone. By MARCO LONGARI (AFP/File)

"Thanks to Caritas (the humanitarian foundation of the Catholic church) which gave us seeds, we replanted and we're starting to harvest peppers and tomatoes," he said. "But we still lack so many things."

"After the cyclone, many people fled their villages to live with relatives... but now they've returned, and have neither a house nor food."

As soon as Beira airport reopened after the storm, humanitarian NGOs and UN agencies flew in to the region to help the population, among the poorest on the planet.

But despite a major rescue effort, the basic needs of hundreds of thousands of cyclone victims remain far from satisfied. Funding is cruelly short.

In July, international donors committed themselves to giving $1.2 billion (1.09 billion euros) to support rebuilding in Mozambique. This pledge was a long way from the estimate of needs by the United Nations at $3.2 billion.

Part of the humanitarian armada seemed to abandon Beira once the world's cameras were turned elsewhere.

"Some NGOs left without saying why," Miguel said. "Entire villages were left to fend for themselves."

When the papal visit was announced some Christians assumed Beira would be the first place he would visit in Mozambique, and so were left disappointed on finding he would not come.

A picture of Pope Francis lays on an open page of a Missal at the Our Lady of the Rosary Cathedral in Beira, central Mozambique on August 21, 2019.. By MARCO LONGARI (AFP)

"His visit is a source of joy for Mozambique, a blessing for us all," said Luisa Baulane, 65, attending the evening mass at Beira cathedral.

"It's a pity he's not coming here to see us, where the cyclone did so much harm. He should have done."

"Many Christians are disappointed... They thought he was best placed to comfort us," said the cathedral's deputy, Father Alfredo Manhica.

"But they've realised that his schedule wasn't just up to him."

"His visit will be a great moment of joy," Manhica added, "and his presence will focus the eyes of the whole world on Mozambique's problems".

Some Beira residents simply expressed resolve to see Pope Francis at close quarters in the capital.

"We felt the cyclone blowing right over us," said one of them, Jose Goncalves, "So there's no question of missing the Holy Father's mass in Maputo."