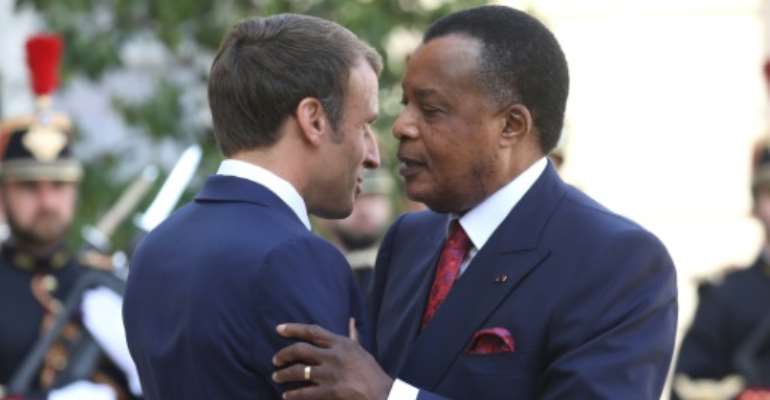 The Congolese president's first bilateral meeting with his French counterpart focused on the protection of the forest. By ludovic MARIN (AFP)

Talks were focused on the fate of the Republic of Congo's basin forest, commonly referred to as the "second green lung" of the planet after the Amazon.

The aircraft, registered as 2-DEER, set off from Brazzaville Sunday evening and landed near Paris shortly after 0600 GMT, according to flight tracker websites FlightAware and Flightradar24.

Congolese authorities did not respond immediately to comments about the plane when contacted by AFP.

The plane is one of the most luxurious on the market.

It has a 220-square-metre (more than 2,300 square-foot) cabin, which includes a lounge-dining room, bedroom, bathroom and dozens of first-class seats.

Press reports say the plane costs $70,000 an hour to fly, meaning the one-way trip from Brazzaville to Paris would cost around $500,000 dollars.

France in 2010 launched a wide-ranging corruption probe into the ruling elite in Congo-Brazzaville. To date, five members of Nguesso's entourage have been charged.

His meeting on Tuesday with Macron focused on the protection of the forest and biodiversity in the Congo basin, according to the French presidency.

A source said Sassou reiterated his support for the Central African Forest Initiative, a partnership launched by Norway worth about $60 million.

Congo pledged to put in place a plan to protect forests, biodiversity and peat lands, in return for financial assistance, the French presidency and a Congolese official said.

The International Monetary Fund (IMF) announced in July that it would grant $448.6 million over three years to Brazzaville to revive its economy, which has taken a knock due to falling oil prices, in the hope of more "transparency" of its public accounts.