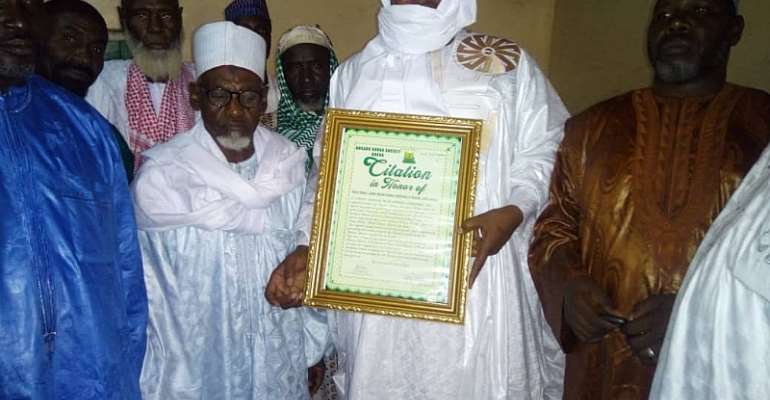 The Bamba Community in Ghana has been charged to unite and pursue peace in the interest of developing their community and collectively take advantage of the Akufo-Addo led policies in the educational and agricultural sectors.

The call was made during the installation of a 39 year-old businessman, Abdul Halim Unus as chief of the Bamba Community in Ghana.

The decision to install him was taken after his appointment and confirmation by twenty five Muslim elders made up of Sheiks, Imams, and elders from Muslim Malian Songhai group in the country.

The prayer and peaceful solemn installation ceremony was held at the private mosque of Chief Alhaji Bakarya of Ashaiman.

Chief Alhaji Bakarya who did the installation indicated that government is on course in its programs and policies and since the people of the Bamba communities are mostly farmers and businessmen and women, their lives can be transformed if they collectively unite and support each other towards that agenda.

The Bambas who migrated from Mali has a rich cultural traditional heritage, with a unique history of warriors and conquerors from the historic days of Sumanguru and Mari Jata of Mali.

Today most Malians who traveled far and wide across their homelands have found themselves in other nations such as Ghana due to their interest in the economic growth and personal wellbeing of their country.

Some have diverted into the areas of imports and export of food crops like onions.

Some of the Malians who settled far back in the seventh century in Ghana such as Bonkana Ali, the grandfather of the newly installed Bamba chief, who once served as a soldier in then Gold Coast British Colony was also a trader and farmer who brought foodstuffs to the then Salaga Market in Accra for sales.

Although the Bamba community group traces its origin from Mali of the Songhai Empire, most of the Muslim indigenous communities mostly the Zongos in Ghana are farmers and livestock producers who settled across the country.

Today Bamba Community has grown into a large group made up of mostly Muslim with a common goal of developing their skills and potentials in diverse areas of human endeavors in the building of Ghana National Economy.

Abdul Halim Unus, in his traditional white turban decorated robe called on all Bamba to unite to foster peace towards the development of their various communities throughout the country.

He pledged to bring unity and peace among his people so that together, they will build a better community.