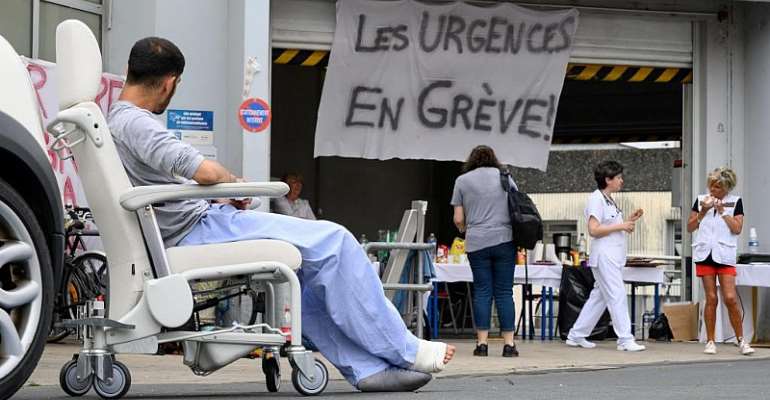 France's emergency services have been on strike for the last six months, with personnel at breaking point. The new measures announced by the health minister on 2 September are seen by doctors' representatives as too minor to make a real difference.

While visiting a hospital in Poitiers, in the centre of France on Monday, the health minister Agnès Buzyn said she “can't deny that medical staff are under enormous pressure”.

There are 637 hospitals and clinics across France, and emergency services say they can no longer deal with the ever-rising number of patients, with less staff and less hospital beds than before.

According to Allocdocteur, a specialized website moderated by French doctors, France's emergency services set a new record in 2017 of 21,4 million visits, an increase of 2,1 percent over a year.

At the same time, according to a report published on 3 July by the national centre for research and statistics evaluation (Drees), the number of beds in emergency wards in France went below 400,000 for the first time ever.

Measures for elderly care
One of the key changes announced by the minister will effect elderly people, who will be able to access hospitals directly without going through the emergency services first, thus reducing queues in waiting rooms.

A video link will be set up for the emergency services (SAMU) to monitor elderly residents in retirement and care homes (Ephad) at a distance to avoid unnecessary travel.

In other areas, ambulances will be authorized to take patients directly to a doctor or local clinic rather than emergency wards.

Paramedical assistants will be able to prescribe certain procedures such as x-rays, stitches and given a bonus of 80 euros as an incentive.

Doctor Christophe Prudhomme, spokesperson for France's emergency services association (Amuf) and member of the CGT union says he's very disappointed that many of the measures announced are rehashed proposals and don't address the real demands of medical staff.

Staff shortages
When it comes to elderly people, he says the number of places in geriatric care has been reduced, thus pushing these patients towards other services.

Most elderly people don't need to be in emergency services in the first place, he says because care homes should already have sufficient medical services, but there isn't enough personnel recruited in these establishments.

“They [care homes] must be given more funding. And as for the video assistance – I don't believe it will work. To care for humans, you need humans!” he told RFI.

One of the minister's announcements was to propose more training for nurses to deal with special emergency cases.

This is of course a welcome step, says Prudhomme, but he insists that these trainees then must then be paid adequately to reflect the extra years of study and the often challenging working conditions.

'Hospitals are not hotels'
Prudhomme is also very critical of what is known as 'bed management' in hospitals.

“It was proposed ten years ago, if it was going to work, we would have seen results by now! The 'just-in-time' management is not possible. A hospital is not a hotel!” he told RFI.

He says running a hospital at 85 percent capacity is dangerous and dysfunctional and can lead to deaths. “We can't work in conditions where the need for hospital beds varies by 20 percent from one day to the next,” he says.

Agnès Buzyn will host all health partners for further discussions on 9 September, and that other announcements would be forthcoming.