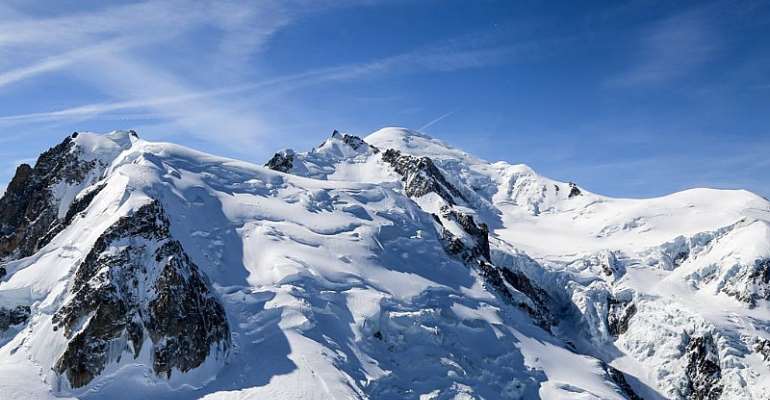 A piece of gym equipment has been abandonned of the slopes of Mont Blanc, France and Europe's highest peak. Not only has this bizarre story made the pages of the French daily newspapers, it has also been drawn to the attention of President Emmanuel Macron.

A man who gave his name as Matthew Disney and said he was a member of Britain's Royal Marines last Saturday carried a rowing machine up Mont Blanc, the highest mountain in Europe. Tired after his bizarre solo exploit, and perhaps after a spot of rowing at the summit, Mr Disney did not have the strength to carry the device back down, so he abandoned it in an emergency refuge at 4,362 metres above sea level.

This has made the mayor of the neighbouring town of St Gervais les Bains very angry. So angry, the mayor has written to President Emmanuel Macron, asking the French leader to take action against the “lunatics” who, in the local official's estimation, risk disfiguring the national park dominated by the mountain.

The mayor, Jean-Marc Peillex, has reached the end of his roll.

Hard times for an innocent hund
The same weekend as the exercise machine, a German tourist forced his dog to climb to the summit, despite having promised mountain police that he would leave the animal in a refuge. The dog owner left quietly in the middle of the night, complete with dog, and finished the climb. The animal survived, but with badly injured paws. You can see photos of the unfortunate beast (as well as of the high-altitude rowing macine) on Mayor Peillex's Twitter account.

Earlier this summer, two Swiss climbers landed a small plane just east of the summit of Mont Blanc, and then struck out for the top.

Stopped by police, they were fined the maximum 38 euros for failing to use an officially designated airport. At least they didn't leave the plane behind them!

Officials are already grappling with a huge influx of climbers hoping to scale the 4,809-meter-high peak, which has sharply increased security risks as well as environmental impacts.

Warmer temperatures in recent years have melted permafrost, the year-round ice found at high altitude, raising the risk of rock falls on the most popular routes.

Retreating glaciers, which are melting under the effect of higher temperatures, are also leaving the granite slopes more vulnerable and less supported.

In May, officials banned climbers from scaling Mont Blanc unless they had booked a room in one of the three official shelters.

The Alpine peak now attracts nearly 25,000 climbers every year, but the daily crowds have led to flaring tempers among teams jockeying for position, and to rampant illegal camping.

So far this season at least three climbers have died on the slopes of the mountain.

Letter to our leader
"This situation has gone on long enough!" Peillex says in his letter to the president.

Evoking an open-air amusement park and the rather worrying image of “seals balancing balls and fireworks displays,” the mayor warns that the peak risks losing its status as a Unesco World Heritage Site.

Jean-Marc Peillex wants Emmanuel Macron to "write and pass laws without delay that from 2020 would severely punish all these wackos (that's the news agency AFP's translation of the French term hurluberlus) who break the law, and restore peace to Mont Blanc."