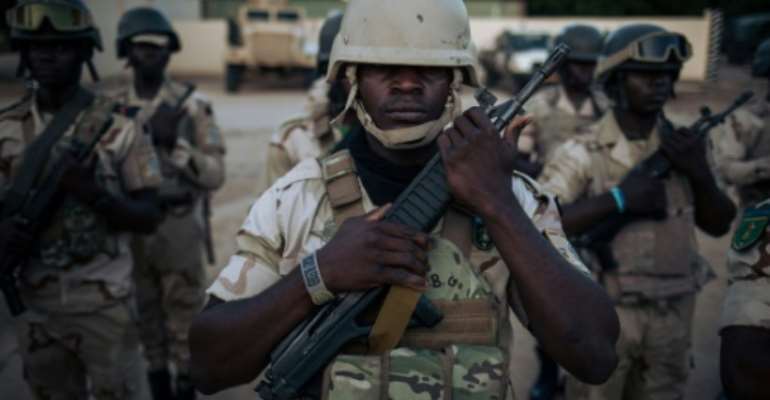 Troops in majority-francophone Cameroon's two English-speaking regions have been battling separatists since 2017. By ALEXIS HUGUET (AFP)

The leader of Cameroon's anglophone separatist movement Julius Ayuk Tabe and nine of his supporters will appeal life jail terms handed down by a military court, one of their lawyers said Tuesday.

Ayuk Tabe was convicted and sentenced last month on terrorism and secession charges as part of a crackdown on a breakaway rebellion for the country's two English-speaking provinces.

"We have informed the Appeal Court of our clients' decision to appeal," Joseph Fru, part of a collective of lawyers defending the separatists, told AFP.

He said the team were currently drawing up the appeal.

"It appears that the military court handed down a hasty verdict and sentence without giving the accused any meaningful opportunity to defend themselves," said Lewis Mudge, Central Africa director at Human Rights Watch (HRW).

The military court in Yaounde admitted thousands of pages of statements and documents as evidence against the accused and over 1,000 items of forensic evidence, such as guns, spears, and laptops, said HRW, citing the defence team.

But the defence lawyers were given no prior knowledge of the material and so were unable to effectively challenge it, the group added.

The trial was also conducted in French without adequate translation, even though the defendants had a legal right to a trial in English, their mother tongue, HRW said.

As well as the jail sentences, Ayuk Tabe and his nine colleagues were ordered to pay 262 billion CFA francs -- around 400 million euros -- in damages and legal costs, HRW said.

Separatist leaders organised a shut down Monday of the country's anglophone regions in protest at the sentences handed down last month, closing schools and shops.

Ayuk Tabe, a charismatic 54-year-old leader who trained as a computer engineer, is the first self-proclaimed president of "Ambazonia" -- a breakaway state declared in October 2017 in the two anglophone regions.

Since 2017, Cameroon's army has battled the separatists, who say they were reacting to discrimination from the country's francophone majority.

The conflict has killed some 2,000 people and driven hundreds of thousands from their homes.

Ayuk Tabe was arrested with 46 other separatists in the Nigerian capital Abuja in January 2018 and then handed over to Cameroon. A Nigerian court ruled in March that their extradition had been illegal.