JDM Will Rob You of Your Trainee Allowances Once More 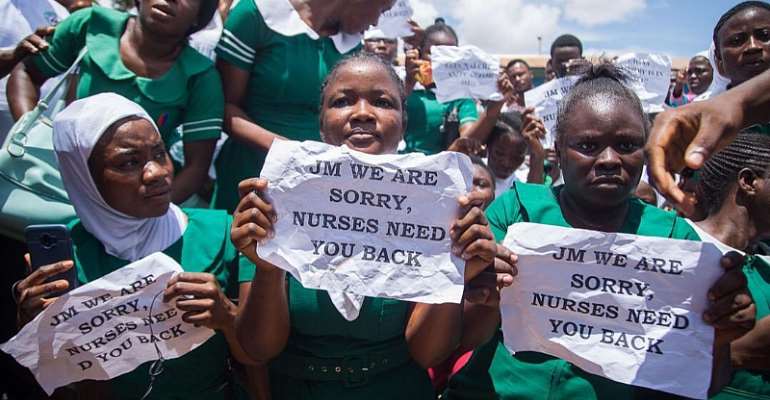 When I saw and read the news story in which some student nurses of the Nalerigu Nursing and Midwifery Training College were reported to be “crying” for the return of the man under whose presidential reign-of-robbery their long-established nurse-trainee allowances had been taken away from them permanently, two things immediately came to mind. One, either the students concerned were diehard members and supporters of the main opposition National Democratic Congress (NDC), to whom, like your classical breed of political fanatics, reason and common sense had absolutely no value, whatsoever, or Two: These grossly misguided students had simply been paid, in the characteristically desperate manner that is widely associated with the infamous “Create, Loot and Share” leaders of the National Democratic Congress. Or, even thirdly, they could just be masochists and/or psychological basket cases.

It was only a matter of time before the unvarnished truth came to light, I chuckled to myself. Which was why I could not pity the former President well enough, when shortly thereafter another news report sprung up that alleged that Mr. John Dramani Mahama had written a note of gratitude to the measly four-and-half dozen, or so, students who had appeared on the durbar grounds where the former President was holding a “Thank-You” gathering with the Chiefs and People of Nalerigu who were wielding placards a couple of which read as follows: “We Are Sorry, JDM” and “We Want You Back, JDM” (See“Mahama Paid Nalerigu Nursing Students to Chant ‘We Are Sorry’” MyNewsGh.com / Ghanaweb.com 8/31/19).

Now, we are also being told that a note was dispatched to the students who had written their names down and committed themselves to falsely propagating news of the supposedly good governance laudably pursued by the Mahama regime, had to appear before a Mr. Shaibu, said to be the General-Secretary of the NDC’s TEIN chapter on the campus of the Nalerigu Nursing and Midwifery Training College, to contact the Mahama point man on the Nalerigu campus of the NNWTC receive the “Little Gifts” brought for them by the former President. That this flagrant albeit characteristic act of bribery comes in the wake of Mr. Mahama’s call for an investigation into the question of whether some of the NDC members who participated in the party’s most recent parliamentary primaries had influenced the outcome of the elections with money, is all the more to be questioned as a serious proposition.

I have absolutely no doubt about how insignificantly little these gifts may be, when meaningfully compared to the visionary and progressive restoration of the Nurse-Trainees’ Allowances by the Akufo-Addo-led government of the New Patriotic Party. This is how criminally wicked – I fully recognize the tautological appropriation of the terminology of “criminally wicked” – power-drunken charlatans like Mr. John Mahama can be. But even more significantly, I am elated in no small measure by the equally sophisticated ability of Ghana’s media to promptly expose the charlatanic propaganda strategy being employed by the unconscionable Mahama Posse to literally return the country to the Dark Days of Dumsor. I also do not the least bit feel either disturbed by the suicidal mischief of the handful of students from the Nalerigu Nursing and Midwifery Training College who participated in Mr. Mahama’s dirty propaganda gimmickry.

Indeed, if the former President had any remarkable sense of decency, he would rather have profusely apologized for crassly deceiving these students many of who are from economically deprived family backgrounds and struggle extremely on a daily basis to make ends meet, even with the all-too-sensible and socially responsible and politically constructive restoration of their Mahama-abrogated age-old trainee allowances by President Addo Dankwa Akufo Addo. It is also quite likely that many of these make-believe “Mahama Comeback” student propagandists may have already regretted having so scandalously and shamefully allowed themselves to be so facilely used and abused for the patently indecent power grab by the man whom the Founding-Father of his own party has innumerably described as the most corrupt and incurably incompetent Ghanaian citizen ever to be elected President.

You see, Dear Reader, Ghanaians, by temperament, generally tend to be faultily tolerant of even pathologically self-infatuated and self-absorbed politicians like former President John Dramani Mahama; but we are, of course, absolutely by no means that naïve not to readily recognize the same when we are being maliciously taken for a ride by any unscrupulous robber-baron politician.

[Hot Video] Shatta Wale vim dies as prisoners hoot at him in...
6 minutes ago