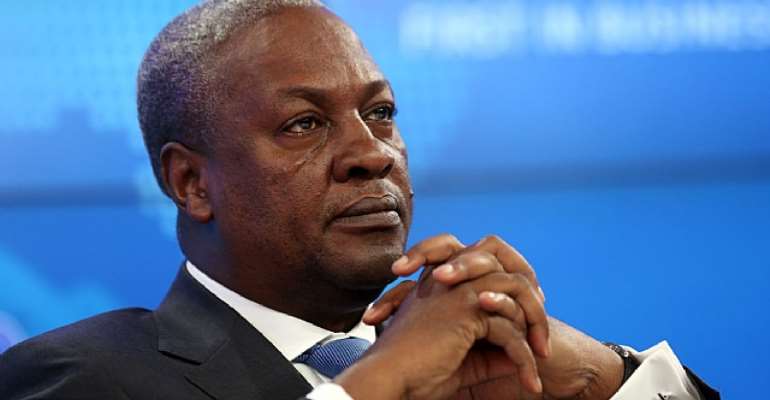 He obviously has absolutely no clue that it was his gross incompetence that caused the current banking crisis in the country. And nobody really expects him to know what he is talking about. The fact of the matter is that former President John Dramani Mahama was never good at the very cerebral and visionary art of governance; which clearly explains why in the runup to the 2012 Presidential Election, he had to characteristically and shamelessly copycat then Candidate Addo Dankwa Akufo-Addo by vacuously presuming to match the former Attorney-General and Minister of Justice “Boot-for-Boot” by selecting the late Vice-President Kwesi Bekoe Amissah-Arthur, then Governor of the Bank of Ghana, as his running-mate (See “Banking Crisis Developed Under Your Watch And You Did Nothing About It – Bawumia to Mahama” Modernghana.com 8/29/19). We also witnessed then President Mahama using his power and influence to play games with at least one privately-owned banking institution that his younger brother, Ibrahim Mahama, was having problems with.

We would, of course, later learn that Mr. Mahama had absolutely no use for his own Vice-President. As well, we would learn shortly thereafter that it was, in fact, Mr. Stanislav X. Dogbe, the reporter-beating Mahama Presidential Staffer who, literally, ran the Mahama-led government of the National Democratic Congress (NDC), according to the soon-to-be-retiring Second-Speaker of the House and the longest-serving NDC-Member of Parliament. Which was why having wisely and progressively cleaned up most of the mess bequeathed him by the equally fiscally clueless Chairman Jerry John Rawlings, the newly elected President John Agyekum-Kufuor would hand over a sound economic climate to the fairly equally fiscally savvy President John Evans Atta-Mills, late. Actually, the rot may very well have begun with the man who scandalously, shamelessly and publicly supported his party’s foremost underwriter and perhaps the Biggest Thief in Ghana’s postcolonial history, that is, assuming that the recently suspended Public Procurement Authority (PPA) Chief Executive Officer (CEO), Mr. Adjenim Boateng Adjei, is not found to have broken the criminal heist record of Mr. Alfred Agbesi Woyome.

But what needs highlighting ad nauseam in the leadup to the 2020 General Election are the details of what really went wrong under the previous Mahama regime with the ongoing cleanup of the cardboard banks that were established under the watch of the Mahama-led National Democratic Congress’ government to the average Ghanaian voter. To-date, a critical mass of ordinary Ghanaian citizens is of the erroneous impression that a grossly callous and insensitive Akufo-Addo-led New Patriotic Party, just out of the proverbial blue, gratuitously decided to put widely perceived Mahama partisans out of work, as one “Prophet” Emmanuel Badu Kobi follower wrote in an E-mail to yours truly recently, by closing down these poorly performing banks and put these “politically incorrect” Ghanaian citizens out on the streets.

Fortunately, at his recent launching of the United Nations’ Office for Project Services (UNOPS), a $ 5 Billion (USD) policy initiative aimed at the construction of some 100,000 (One-Hundred-Thousand) homes in the country, Vice-President Bawumia clearly and eloquently explained what really went on with the privately owned system under the “Create, Loot and Share” Mahama-led government of the National Democratic Congress. Basically, a morally and fiscally irresponsible situation was created whereby entrepreneurial scam-artists – I fully recognize the fact that such characterization is a contradiction in terms – were encouraged via an abject lack of official or government oversight to use false pretenses to defraud hundreds of thousands, perhaps even millions, of Ghanaians of billions of cedis of their hard-earned currency.

Now, what is more than annoying has been for Mr. Mahama to hit the 2020 presidential electioneering campaign trail, deceiving eligible and potential voters that, in fact, the horrid mess created by the banking crisis was actually the handiwork of the Akufo-Addo-led government of the New Patriotic Party, and that the unconscionable politician who actually created this stygian mess intends to assemble a team of crackerjack fiscal and banking experts, in the highly unlikely event of him being afforded the electoral mandate for the second time, to fix a problem that has already been near-perfectly resolved by Messrs. Akufo-Addo and Bawumia. Yes, that is how insufferably annoying this mischievous, malicious and opportunistic political scam-artist can be.