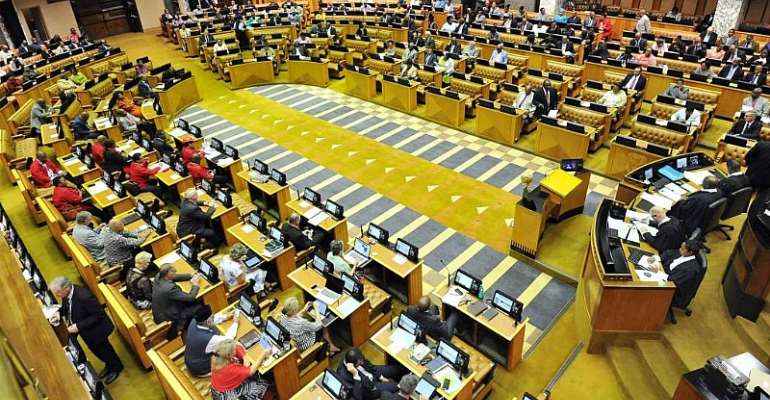 South African MPs rubbish outcry for cuts in their huge earnings as the country struggles through economic hardship.

The official salaries for elected officials in South Africa, range from €71,000 for ordinary MPs to €143,000 per year for officials in the upper echelons of government and parliament.

Recent moves by the treasury to cap public expenditure in the 2019 budget for the first time, left MPs under pressure to relinquish some of their allowances.

Sunday Times reports that while the taxpayer-sponsored freebies handed out to lawmakers leave the average South African green with envy, some of the legislators insist they deserve even more gravy.

Fat-cat MPs
It was the co-chair of the Joint Standing Committee on the Financial management of Parliament, Bertha Peace Mabe, who sounded the first note of defiance, reports the Johannesburg-based Times.

Ms. Mabe's remarks come at a time South Africa's economy is struggling with a 0.7 percent growth rate compounded with an unprecedented 28.5 percent unemployment figures in 2019 alone, according to Statistics South Africa.

"In a country where 60 percent of the working population earn about 3000 rand (€181), Government officials making more than a million rand (€660,000) a year fall within the top ten percent of of income earners", observes Marianne Merten, Parliamentary correspondent for the Johannesburg-based Daily Maverick newspaper.

According to Merten," those are the kinds of figures that push people to see South Africa as one of the most unequal countries in the world".

The apparent lack of political will by lawmakers to tackle the economic slowdown and waning fiscal health of the country are frustrating the efforts of Finance Minister Tito Mboweni and fueling tensions within President Cyril Ramaphosa's ANC-led ruling alliance. Such is the opinion upheld by South African economist Martyn Davis.

SA officials living in a different country
“With joblessness and poverty rising and the middle class being eroded, the general expectation is that the State should take a lead here but they are not”,  Davis who is managing director of the Johannesburg-based Emerging Markets & Africa, said

“At a time when state enterprises, trade unions are clamoring for salary increases of up to 20 percent, these guy's (MPs), are seemingly living in a different economic reality” explains Martyn Davis who is also Dean of the Deloitte Alchemy School of Management.

“There is seemingly a disconnect between politicians and the real economy”, the South African economist told RFI.

Salary scales for SA government officials per annum since 2017