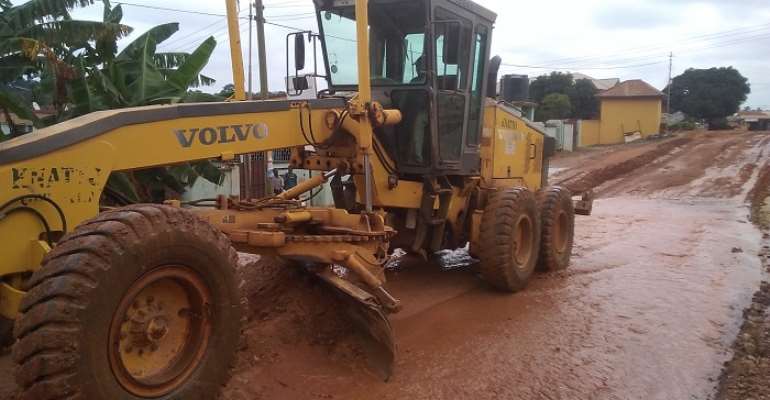 Grader working on the road

Residents of Santasi New Site in Kumasi in the Ashanti Region have hailed the Chief Executive Officer (CEO) of the Microfinance and Small Loans Centre (MASLOC), Stephen Amoah for single-handedly reshaping a five-kilometre road in the community.

Bubbling over with excitement, the residents thronged the streets to witness the grading of their road linking them to the city centre.

According to them, the MASLOC boss' strides are not only appreciable, but also commendable, as the reshaping of the road would open up the community for economic opportunities that will drive development.

“We were tired of driving on rough roads full of potholes. We were fed up of filling them in for the rain to wash the loose stones away. Today, our worries are over thanks to Mr Amoah for the road restoration,” Emmanuel Obour Simpem, a resident stated.

Even though the people know the reshaped road could still be washed out in heavy rains, for now it is enough to keep them traverse from Santasi Zongo junction to the new site areas, noting that the reshaping of the road has made the area easily accessible.

Mr Amoah said in an interview that he volunteered to reshape the road after members of the Landlords Association made appeal to him, explaining, he found the deplorable state of the road to be a potential threat to security and economic opportunities of the residents.

According to him, government was not relenting on its infrastructure development plans, which are aimed at improving economic activities and livelihoods across the country.

He called for them to remain calm, and added that the area has not been left out in government's road construction plan.

The MASLOC boss said the reshaping of the road is not the only contribution made in the area, and pointed out that he had previously donated 180 pieces of street lights to the community when he realized it was part of the needs of residents.

Mr Amoah assured residents of his continuous support to improve upon their lighting system in the area in order to ward off criminal activities in the vicinity.