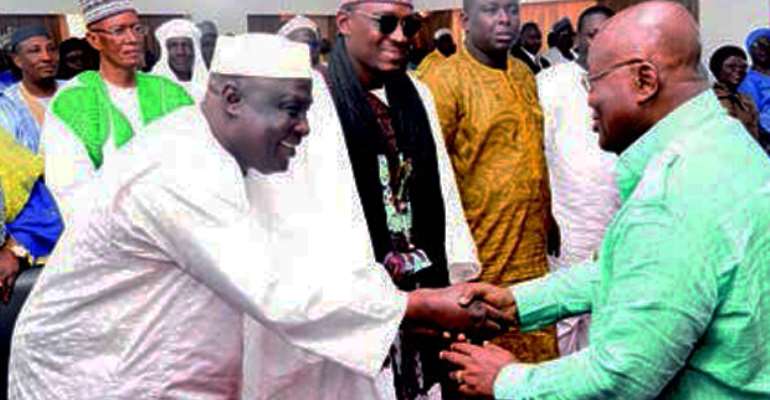 President Akufo-Addo exchanging pleasantries with members of the Songhai community in Ghana at the Jubilee House yesterday. Picture by Gifty Ama Lawson.

President Akufo-Addo has made a passionate appeal to all foreigners resident in Ghana to help protect the country from the activities of possible insurgents.

The West African sub-region has become a target for terrorists groups, including Boko Haram from neighbouring Nigeria, which has become a threat to the surrounding countries.

But President Akufo-Addo believes this can be prevented if everybody in the country is vigilant and report any suspicious activities to the police and other security agencies.

The President made the appeal when members of the Songhai community from Mali living in Ghana paid a courtesy call on him at the Jubilee House yesterday.

With a carefully planned agenda of fostering inter-ethnic and inter-tribal relations among West African nations, he was confident that negative vices such as terrorism can be eliminated from the sub-region.

“The problem is that they are in our part of the world, West Africa, many of them can be readily and easily addressed if the kind of links that you have established here in Ghana are promoted in the whole of West Africa,” he said.

The President added, “We know the difficulties that are taking place in Mali, for instance, and we want to make sure that these kinds of problems are not transported to us here in Ghana.”

The President commended the Songhai community for the way they have conducted themselves throughout the history of Ghana, describing it as the sure way to ensuring all anti-peace and anti-progress happenings on the African continent are prevented from surfacing in the country.

On his part, the Paramount Chief of the Songhai community in Ghana, Chief Amadu Fatahu Alhassan Maiga II, described President Akufo-Addo as the 'Doyen of Ghana’s Human Rights'.

“You used your law firm to champion the rule of law, justice, freedom and democracy, giving free legal assistance to the poor and fought for the rights and liberties of the Ghanaian people. You were regarded as one of the most brilliant advocates in the history of the Ghana Bar,” he said.

Chief Maiga, on behalf of his people, assured the President of their willingness to do all within their power to live peacefully in the country.

“We pledge to continue to respect the laws of Ghana in promoting peace and security and the general well-being of all residents in Ghana,” he said, while emphasizing that “our mission as a community is to promote education, entrepreneurship and civic culture among our people.”