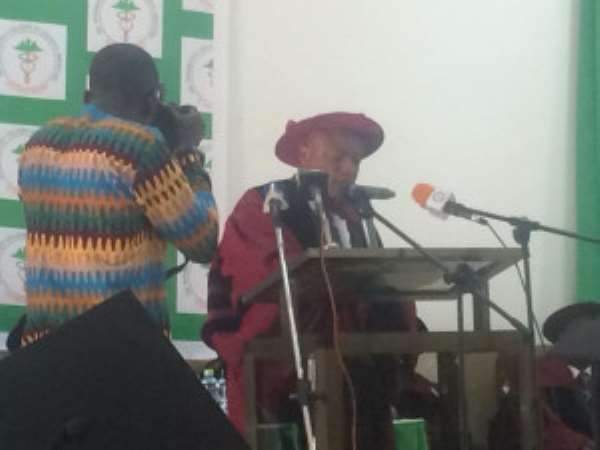 Lawyer Maurice Ampaw has advised men to refrain from licking the vagina of women.

He made the call at the 1st matriculation and white coat ceremony of the Naturopathic Medicine students over the weekend at the newly established Nyarkotey College of Holistic Medicine, accredited by the Traditional Medicine Practice Council of the Ministry of Health to train Holistic Medicine physicians.

"As Natural Medicine students and future practitioners, it is advisable to practice and promote natural sex. Anything unnatural is not from God and is very expensive," he said.

He further called on the government to also create special ministry for natural medicine and make the President of the Nyarkotey College of Holistic Medicine an ambassador as he has proven beyond all doubt there is science in natural medicine.

The call, which is being championed by the private legal practitioner, Maurice Ampah, is to help government harness the benefits the sector possess, which according to research, is worth billions of dollars.

“I therefore want to use this medium to call on the government, especially President Nana Akufo-Addo, to invest into natural medicine industry and also support the director and founder of this college, by promoting and training holistic doctors just as IPS which later became UPSA, started training professional accountants…..

Lawyer Ampaw continued “I am also using this medium to advice to the government to consider creating a special ministry, because this government is used to creating new ministries for natural medicine and make the Professor the Ambassador and a Minister to charge and develop the natural medicine bill as early as possible.

"The natural medicine, will bring great things for Ghana and bring competition to the medical sector, even doctors will stop threatening”.

Lawyer Ampaw, who will be teaching medical ethics at the College, commended highly the exploit of Prof. Nyarkotey and the College, saying it could not have come at a better time than this.

He added that even though the work of conventional doctors cannot be underestimated, they have at the same time, become a burden on government and patients.

According to him, alternative medicine practice is a step in the right direction, as it is going to give their colleagues in the conventional field, a good run for their money.

“I want to say that kudos to conventional doctors, who have been trained by the various universities like the University of Ghana, they have done a lot for this nation.

"They have done a lot for this country, but I can tell you they have also become a burden because of monopoly, they have hijacked the health system at times with strikes, they have refused to go to the rural areas when they are posted, they have left the jurisdiction to go and practice abroad and they have held government ransom anytime they wanted better conditions of service,” he emphasised.

President of the Nyarkotey College of Holistic Medicine, Prof. Raphael Nyarkotey Obu, urged alternative medicine students not to pay attention to ugly noises often attached to the practice by people who lack knowledge about the field.

According to him, criticisms against the practice, are as a result of ignorance and so asked the students to focus on studying and letting their good works speak for them.

“I therefore challenge you not to be downhearted when you are being tagged as quacks in the field,” he stated.

Using a landmark judgment in India to make his point, he stressed that the judgment by the Supreme Court, showed that alternative medicine practitioner, with the right qualification, knowledge and license, cannot be referred to as quack.

Speaking under the theme “Harnessing integrative medicine education and training for socio-economic development is clearly anchored on current global orientation,” he asked the students not to deviate from what they are going to be trained in and ensure they do not allow others to tell them what they are not.

“I therefore entreat you to be in your lane and master your field. Be an author of yourself, don’t let anyone tell you who you are and not. What matters at the end, is the final result. People would celebrate your final product and not your beginning”, he said.

Prof. Nyarkotey, who is an authority in alternative medicine practice and has books and several awards to his credit, also took a swipe at health professionals who talk down on alternative medicine practice, saying it will be better for them to seek knowledge or better still shut up, and called on those who are equipped with the required training to work together for the medical profession.

“As an academic, I know the more one climbs higher the ladder of academic progression, the more one gets to know he knows nothing. So, if you do not understand the principle of alternative medicine, I urge you to keep quiet and call on those who have indepth knowledge in the subject to work together, but not to sit anywhere to downplay on their profession and their academic competency!

"Today, there are people who have enormous knowledge in the field of alternative medicine and it is time for integration,” he intimated.

Prof. Nyarkotey said, this serves as a very big challenge to the nearly $300 billion global market, for alternative medicine, adding this did not mean “Shortage of applicants but shortage of qualified naturopathic doctors”.