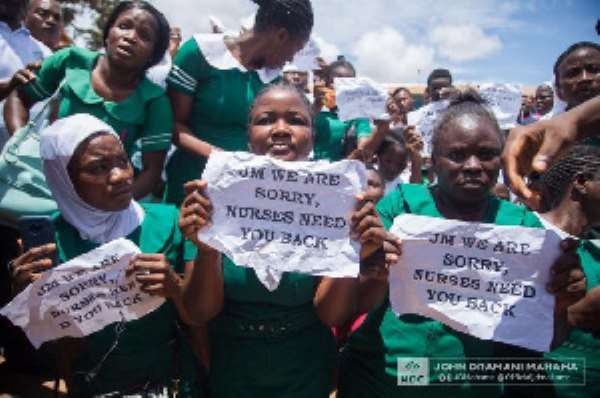 The Students Representative Council (SRC) of College of Nursing and Midwifery, Nalerigu has condemned the unfortunate conduct of students in a video on social media wailing on the floor and apologising to former President John Mahama.

The students council in a news statement signed by its President Mr Achima Paul Baba said they watched the video that went viral on social media in which a handful of students from their school were seen wielding placards with unfortunate inscriptions, wailing on the floor and apologising to Former President John Mahama for voting against him in the 2016 general election with utter shock.

They said the SRC had no prior knowledge of the unfortunate conduct of the students and therefore, condemn it and also disassociate itself from the conduct.

They noted that there are over two thousand (2,000) students in the College and on that account, the actions of about 20 students who did not have the mandate of the students could never be deemed as a reflection of the general sentiments of the entire student population.

“We wish to state that the entire student population, in unison, is satisfied with the restoration of trainee nurses allowance, by virtue of the fact that it has brought much relief to students and eased the financial burden on parents as well,” they stated.

The SRC said the government paid all arrears due trainee nurses and we would want to use this opportunity to express their heartfelt gratitude to the government.

They also admonished trainee nurses across the country to support the government, especially on the restoration of trainee nurses allowance and desist from any acts of ingratitude and dishonesty.