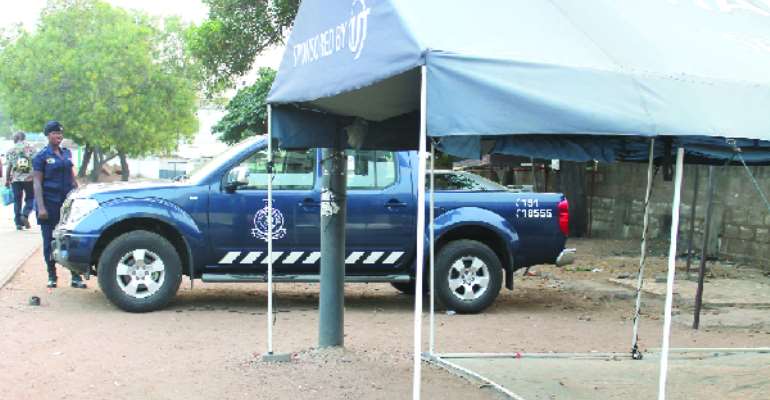 A mentally ill man has been shot to death after he stormed the Kwabeng Police Station with a machete in the Eastern Region.

The two officers present fled the scene and called for reinforcement from the SWAT team at Akyem Kwabeng.

Eastern Regional Police Public Relations Officer, DSP Ebenezer Tetteh, narrating the incident to the Citi News disclosed that the mentally ill man was shot when he attacked one of the police man in the station threatening to slash him with a machete he was holding.

He added that the final report will be made known to the public.

The Police man in an attempt to defend himself, then shot at the mentally ill man who was subsequently rushed to the hospital but died while receiving treatment.

“The body has been quickly transported to the police hospital and investigations have commenced, we have transported the body there to have it preserved for autopsy. When the investigations are completed the matter will be made known to the public.”

The Police have been in the news this past week after two of their men were killed under bizzare circumstances.

The killing of the Police men have led to a heightened increase in conversations on mainstream media on the protection of Police officers in the country.

We must protect our Police – Bawumia

The Vice President Dr Mahamudu Bawumia has urged Ghanaians to help respect and protect the Police in order to enable them effectively maintain law and order.

It is, therefore, necessary for “Ghanaians to see the police and security officers as our family members, friends and protectors.” He admonished.

The Vice-President made this call on the occasion of the burial of L/CPL Awal Mohammed one of the two police officers slain in the line of duty on Wednesday 28th August 2008 in Kumasi.

Extending condolences on behalf of President Nana Akufo-Addo, and the entire government to the family, Vice President Bawumia expressed confidence in the Inspector General of Police and his men to work hard towards bringing “the perpetrators of this dastardly act to book.

He also announced a GHC 10,000 reward for information leading to the capture of any of the perpetrators on the run.