Seven dead after 'out of nowhere' flood in Kenya 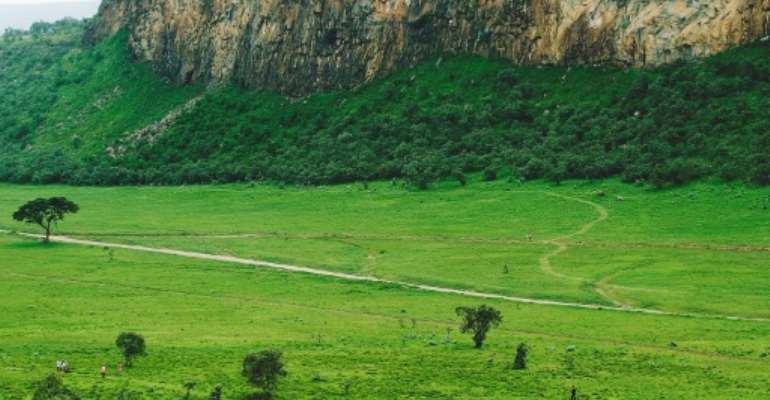 The deep gorges of the Hell's Gate park are often lashed by heavy rains. By TONY KARUMBA (AFP/File)

A tourist who lost his wife and four other family members in a flash flood in Kenya told AFP Monday the wall of water surged "out of nowhere" as they hiked to a popular gorge.

Seven bodies have been recovered since Sunday when floodwaters rushed through Hell's Gate National Park, a weekend getaway from Nairobi that featured in "Tomb Raider: The Cradle of Life".

Six others from the hiking party of 13 managed to escape.

The violent torrent swept away five people from the same family -- four Kenyans and an Indian resident.

Two other Kenyans -- one a family friend, and another a hiking guide -- also perished.

At least two minors were among the dead, a family member told AFP.

Ivraj Singh Hayer, who lost his wife, cousin, his cousin's wife, a niece and a nephew, said it was drizzling when they arrived at the picturesque gorge and their guide advised them to stay at the entrance.

"Then at around 3 o clock, water came out of nowhere," he told AFP.

"It's still difficult for me to understand how exactly this happened. We were trying not to get caught by the water but my family, they were taken one by one".

A police officer taking part in the recovery operation told AFP: "All seven bodies of those swept away have been found."

The deep gorges of the Hell's Gate park are often lashed by heavy rains.

In 2012, seven young Kenyans drowned at the same spot in the Ol Jorowa gorge, a highlight of the park about 100 kilometres (60 miles) northwest of the Kenyan capital Nairobi, and just south of Lake Naivasha.

Since then, tour guides have "been trained to detect storm water flowing downstream towards the gorge," said the Kenya Wildlife Service (KWS), which manages the park.

"Every group is usually accompanied by experienced guides who are able to alert tourists of impending emergencies and direct them to exit points.

"Since the last similar tragedy in 2012, we have created clearly marked emergency exists along the whole gorge as escape routes in case of danger like the flash floods."

Hayer said he waited for the raging waters to ease before scrambling up an embankment with his niece's friend and their drive to escape.

"We ran upwards. We all got stuck in the quicksand, we thought we were gone. But then we just had hope, and we pulled ourselves out," he said.

KWS said Sunday that the gorges were closed to the public as the rains were continuing.

"Our hearts and prayers are with the tourists and tour guide that got swept away by flash floods at Hell's Gate National Park today," Kenya's tourism ministry posted on Twitter on Sunday.

The park, established in 1984, is also home to three geothermal stations.