Pontiff to travel in locally-made popemobile for Madagascar trip 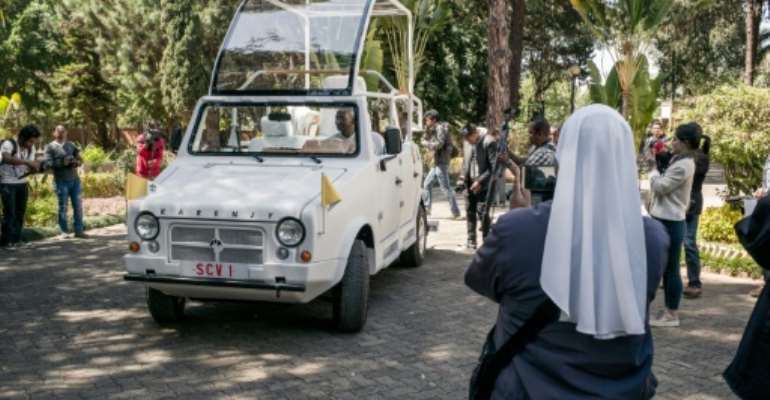 Francis will use the popemobile for greeting the public in Antananarivo, the capital. A majority of Madagascar's 26 million people are Catholic. By RIJASOLO (AFP)

Over the decades, popemobiles have typically been the preserve of major car manufacturers such as Mercedes, Ford and Fiat.

But the vehicle that will carry Pope Francis around the streets of the capital of Madagascar for his visit there this week is locally-made -- and its furnishings are simple and open, in line with the pope's distaste for luxury and aloofness.

Painted in an immaculate white and adorned with two Vatican flags, the open-topped vehicle is made by a Madagascar company called Karenjy.

"It's with great joy that we present you the popemobile," the apostolic nuncio, or Vatican envoy, to the island, Paolo Rocco Gualtieri, told the press ahead of the visit.

"Pope Francis will be delighted to visit Madagascar in this car."

The pope, making his maiden visit to Madagascar, arrives in the capital Antananarivo on Friday from Mozambique, the first port of call on an East African tour that will also include Mauritius.

Karenjy, whose name means "Stroll" in the Madagascan language, has followed familiar design principles for the vehicle.

It has a high roof to protect the pope from sun or rain, a pivoting seat from which he can salute the crowds and a glass screen to allow all-round visibility for the public.

But it breaks with classic popemobiles in that the canopy is not bullet-proof.

"The specifications set by the Vatican for the manufacture of this car have been met in every aspect," Karenjy's representative Jean Fleuris Jaotody told reporters.

"The pope chose not to have bulletproof glass. He prefers simple cars," said Father Germain Rajoelison, deputy coordinator of the papal visit to Madagascar.

"He doesn't like to have a wall separating him (from the faithful). He really wants to be close to the people."

The one-off vehicle is the fruit of five months of labour by 15 workers at Karenjy's site in Fianarantsoa, southeastern Madagascar.

The company, which started life in 1984, uses French-made engines for the sturdy, if boxy, all-terrain vehicles, priced at a relatively modest $7,100 (6,500 euros) and adapted for local needs.

It makes just a few dozen a year.

In 1989, the little-known company scored a PR coup when taking Pope John Paul II for a spin when he visited Fianarantsoa.

Its marketing chief, Henry Roussel, is ecstatic over the order for the popemobile.

"The fact that Pope Francis will be using a locally-made popemobile is really a powerful symbol and message of hope," he said. "It's acknowledging the skills we have in Madagascar."

Father Rajoelison added: "People often say that our country is poor. It is a poor country, but look at the skills these people have. This car was built by people who came from poor families and who got a job."

Bawumia calls for greater unity, cooperation between Muslims...
51 minutes ago