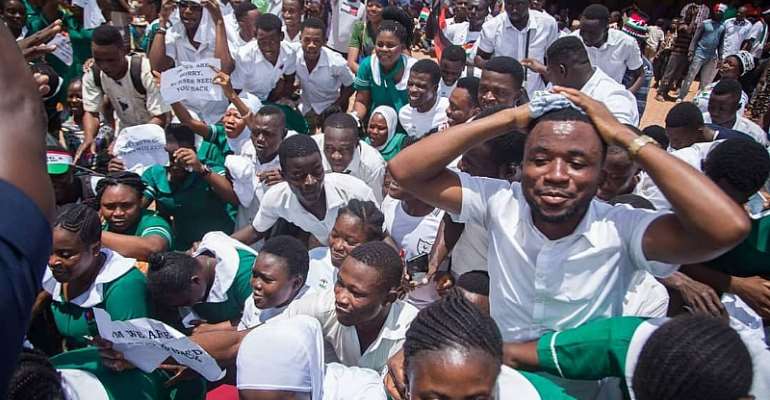 The National Secretariat of the Tertiary Education Institutions Network (TEIN) is, by this release, expressing worry and dissatisfaction about the way the Akufo-Addo led government has constantly victimized heads of educational institutions and students who have done no wrong but for merely expressing their Civil and Human Rights as enshrined in the 1992 constitution.

This constant act of victimization under a President who prides himself as a Human Rights lawyer is an eyesore, undemocratic and against the right of every Ghanaian citizen.

We would recall that, under President Mahama, the then NPP Running Mate, Dr. Mahamudu Bawumia campaigned in most Nursing and Teacher training Colleges, Senior High Schools and even Basic Schools. The general public would agree with us that, under no circumstance, was any student or head of any institution victimized for any reason whatsoever.

We would want to take this opportunity to call on President Akufo-Addo to desist from this disgusting act of victimization and focus on delivering on his promises.

Furthermore, we saw in the video that a section of the Nalerigu NMC students were chanting "We are sorry" upon the arrival of H. E. John Dramani Mahama. This is a clear indication that the Akufo-Addo-led administration has woefully failed Nursing and Midwifery trainees in the country.

As it stands now, the 2017 and 2018 year groups of Nurses have not been employed. It must be put on record that, H. E. John Dramani Mahama's administration ensured the recruitment of all Diploma Nurses at the time he was leaving office as President.

Again, it will be prudent for the President to appreciate the fact that governance is continuous. By this, we mean to say that, projects initiated by the Mahama-led admission must be continued and completed. As it stands now, there are hundreds of CHPs compounds which were initiated by the erstwhile Mahama administration that have been abandoned and left to rot. The University of Ghana Medical Center, Bank of Ghana Hospital, the Upper East Regional Hospital and many other district hospitals have been left to rot. Meanwhile, these health facilities can employ millions of health workers including Medical Doctors, Physician Assistants, Nurses and Midwives, Cleaners and Hospital administrators.

We call on the general public to add their voices to compel government to complete all abandoned projects which could have employed millions of our unemployed graduates at home, including nurses, teachers, physician assistants etc.

By and large, we call on President Akufo-Addo to desist from victimizing students and authorities, ensure the employment of all Nurses who completed college in 2017 and 2018. We again call on the President to clear the five-month outstanding debt owed Rotation nurses as a matter of urgency.

Nurses deserve to be treated with dignity.

Seized rosewood to be used for National Cathedral constructi...
44 minutes ago

Anti-LGBTQ bill gazetted, to be laid for first reading on Mo...
49 minutes ago