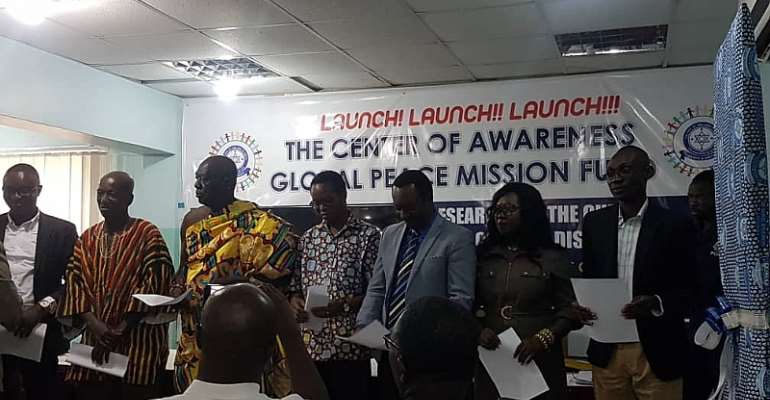 Center of Awareness Global Peace Mission, a non-governmental organization currently in the process of discovering a cure for HIV/AIDS has indicated that about $200 million is needed to undertake a worldwide trial of the cure.

The Executive President of the mission, Prof. Dr. Samuel Ato Duncan made this revelation on Monday at the inauguration of a 13-member Board for the Mission.

The occasion was also used to launch a research fund to support research into the cure for Human Immunodeficiency Virus (HIV).

Speaking at the launching ceremony in Accra, Executive President of the Centre of Awareness Global Peace Mission, Prof. Samuel Ato Duncan, noted that as part of the Center’s peace mission, has identified diseases as one of the problems confronting peace of humanity.

It is in this regard, the Center Scientifically developed and produced potential drugs for such diseases.

Prof. Duncan hinted that the Centre of Awareness Global Peace Mission, discovered a formula through which further research has resulted in the discovery of a potential drug for the cure of HIV/AIDS, exactly thirteen years ago on 26 August 2006.

This he said, after having spent over $20.000 million on research into the discovery, a lot still remains to be done in actualising the aim in finding a permanent cure to HIV/AIDS.

According to him, the formula he discovered thirteen years ago has proven from retrospective studies from credible Research Institutions that, it has some potentials of curing HIV/AIDS.

Stressing that, if the Centre gets the right equipment and machines for producing the drug, put together researchers to conduct further research on the COA Products using international Standard Protocol set by the WHO and getting Moral and Financial Support, within two to four years, Ghana and the whole world will boast of having cure for HIV/AIDS. The dream of all persons living with HIV/AIDS.

This he said, these drugs have gone through the initial stages of scientific research by the following institutions:

• The University of Kwazulu Natal of South Africa.

According to him, currently, the Department of Biochemistry and the Department of Microbiology and Immunology –School of Medical Science of the University of Cape Coast are conducting research into the adjunctive use of COA FS on Tuberculosis at the Masters level.

This research is expected to be completed before the end of the year 2020. The research is fully funded by The Center of Awareness Global Peace Mission and is estimated at USD 150,000.00.

HIV is a very dangerous virus the world must develop an antidote to stop its spread or eliminate it completely,” he emphasised.

However, Prof. advised Persons Living with HIV and AIDS not to abandon their Antiretroviral medications while taking the COA FS, but to take the later as an immune booster to quicken the process of repressing the viral loads and their CD4 Counts.

He, therefore, called on all and sundry to come on board as they furthering the research.

Since they are not only targeting the cure for HIV/AIDS but other diseases currently without cure such as Cancers, Hepatitis, Kidney failures, and Tuberculosis.

Individuals and organisations can donate to the fund through the following;