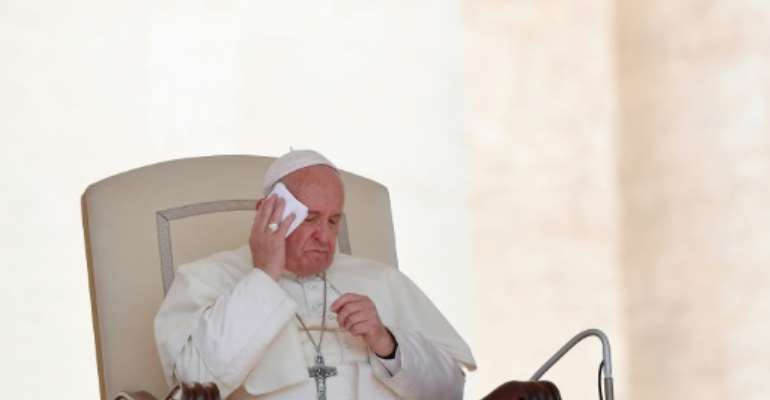 Pope Francis recorded a video message in Portuguese to the people of Mozambique ahead of his visit. By Tiziana FABI (AFP)

The pope will visit Mozambique and Madagascar, as well as Mauritius, countries visited by pope John Paul II in 1988 and 1999.

Commentators see the pope's decision to visit two of the most impoverished countries in the world as an act of solidarity from a cleric who was a frequent presence in the shantytowns of Argentina.

Mozambique is first on his tour, and the pope recorded a video message in Portuguese for the people there ahead of his tour, mentioning John Paul's visit.

But the man known as the "pope of the poor" will only have time to visit the countries' three capitals.

That will disappoint those in Mozambique's city of Beira, in the centre of the country, where Cyclone Idai killed at least 600 people and left hundreds of thousands homeless in March. 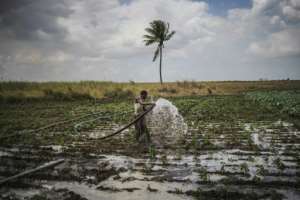 The pope will not be able to visit Beira, devastated by Cyclone Idai in March, but sent a message of solidarity. By MARCO LONGARI (AFP)

Six months on, many people are still homeless and lacking a regular source of food.

"I was hoping the pope would come and walk on Beira's soil," 45-year-old Maria da Paz told AFP, while taking comfort in the fact that some victims of the disaster would be in Maputo to meet the pontiff.

The pope, in his video message, anticipated the disappointment.

"Although I am unable to go beyond the capital, my heart reaches out to all of you, with a special place for those of you who live in difficult situations," he said, adding: "You are all in my prayers."

The Mozambique government has spent 300,000 euros ($330,000) preparing for the pope's visit, according to Foreign Minister Jose Pacheco, including repairs to Maputo's cathedral and improvements to the city's roads.

Pope Francis's visit comes a month after the government signed a historic peace treaty with the former rebels Renamo, who are now the main opposition party.

The 16-year civil war devastated the country, and Renamo has never completely disarmed. 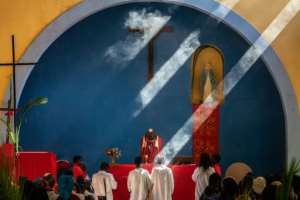 Mozambique was hit by Cycline Idai in March, but a month later worshippers continued to gather at this church in Barrio Manasse. By Zinyange AUNTONY (AFP/File)

In his video message, the pope stressed the need for "fraternal reconciliation in Mozambique and throughout Africa, which is the only hope for a solid and lasting peace".

The pope may also address the issue of extremism in a region that has come under attack over the past two years from jihadists, with a death toll of more than 300.

The pope will also visit the Indian Ocean island of Madagascar, one of the poorest countries on the planet where three quarters of the people live on less than two dollars a day.

As well as the more conventional visits to the presidential palace and a seminary, he is due to speak to workers at a quarry.

"We have prepared for 800,000 people to turn out at the great mass celebrated by the pope" on the diocesan grounds of Soamandrakizay, said Gabriel Randrianantenaina, coordinator of the local episcopal conference.

Local organisers have cleared 60 hectares (150 acres) of land for the event in the north of the capital Antananarivo.

Pope Francis will end his tour with a brief stay in the relatively prosperous and stable Mauritius, a small island nation east of Madagascar, where the local Catholic community plans to plant 200,000 trees in his honour.

While Mauritius is around 50 percent Hindu it has a substantial Christian minority of about 30 percent, most of whom are Catholic.