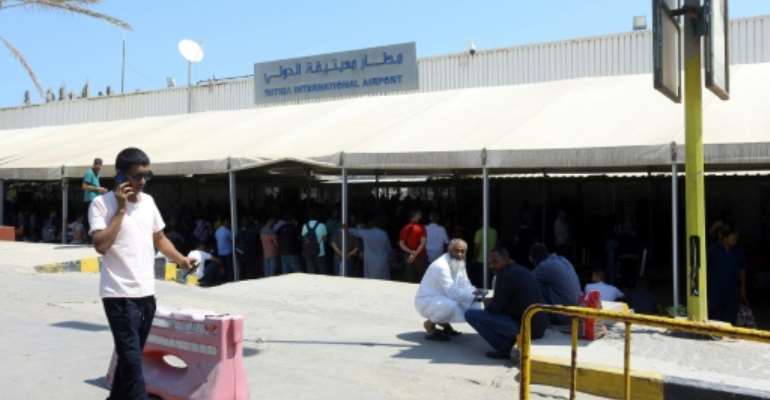 The Libyan capital's sole functioning airport at Mitiga has been repeatedly caught in fighting between loyalist forces and fighters of strongman Khalifa Haftar who launched an offensive in April to seize Tripoli. By Mahmud TURKIA (AFP/File)

The strikes coincided with the arrival of a Libyan plane inbound from the Saudi Arabia, which was carrying pilgrims on their way back from Mecca.

Three pilgrims, including a woman, were among four civilians wounded, said Wedad Abu Niran, a spokesman for the UN-recognised Government of National Accord's health ministry.

Airport director Lotfi al-Tabib said Mitiga's runway was damaged and a Libyan Airlines plane was hit by shrapnel, putting it out of service.

Flights have been suspended "until further notice", Tabib added.

The Tripoli-based GNA controls the former military airbase east of the city, which has been used by civilian traffic since Tripoli international airport suffered severe damage during fighting in 2014.

In a statement, the GNA blamed what it called a "terrorist attack" on forces of Haftar and urged the international community to assume "its responsibilities concerning the protection of civilians".

The two sides have since been embroiled in a stalemate on the capital's southern outskirts and Haftar's forces have allegedly repeatedly targeted Mitiga, accusing the GNA of using it for "military ends".

A similar strike on Mitiga killed a guard and wounded several security agents on August 15.

Last week, the airport closed temporarily due to a rocket strike that hit as two planes were arriving, though no causalities were reported.

Haftar's forces say they are targeting "Turkish drones" that they claim take off from the airport to conduct strikes on their troops in the south of Tripoli.

The UN mission in Libya said it is concerned by the "growing frequency" of these attacks, which have come close to hitting civilian aircraft.

Since April, fighting between GNA and Haftar forces has killed at least 1,093 people and wounded 5,752, while some 120,000 others have been displaced, according to the World Health Organization.