Owusu Bempah Writes: Who Is Next After Mills, Amissah...."My Second Coup Detat" 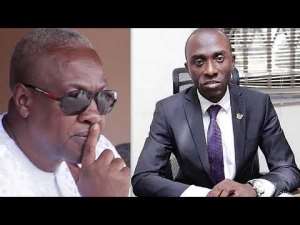 So I have been thinking about John Mahama's inordinate ambition to become president of Ghana again after his failed leadership the first time.

Despite Mahama's so-called chronological experience in national politics, his inability as a presidential hopeful to acknowledge the infeasibility of the blurry vision, and twisted policies, makes me question his intellectual capability, and sophistication in grasping political concepts, and their practical applications.

If there is an achievement differential between the Akufo-Addo administration, and the erstwhile Mahama regime, then, the NDC presidential candidate should not pander to the public for votes. Afterall, the average Ghanaian has the primary intellectual ability to make a critical assessment between an imaginary gold-plated heaven under the NDC administration, and “hell” under the NPP.

So my question is, what on earth will make a man attempt to come back to power after being the vice president and then president? Well, the answer lies in the fact that Mahama has always been on a mission- a mission to plot his second coup detat?

Yes, you should read Mahama's book "My first coup detat" to understand where I am coming from. We are talking about a man who could even describe himself as spineless, indecisive and even go ahead to say that danger lurks around every life decisions that he makes.

What was Mahama thinking when he mentioned to his fellow colleague MPs some time back in confidence that "Northerners are tired of playing second fiddle in the NDC?" Was he eyeing for the top job? Is it true that he accepted to be Mills' running mate after he was shown Mills' medical records and after a long persuasion centred on his health?

The Mahama situation is unpardonably revulsive and it is clearly as a result of the abject lack of leadership from the NDC.

Why did Mahama failed to investigate the circumstances leading to the demise of late president Professor John Evans Atta Mills? Is it just a mere coincidence that President Mills died when Mahama was vice president, and then Mahama's own vice Amissah Arthur also passing on when he ascended the high office of president?

With his questionable exploits like an albatross dangling around his neck, who want to be Mahama's running mate again?

Like our colonial masters, some NDC politicians and Mahama mistake the Ghanaian public for injudicious preschoolers in need of parental tutelage. Unbeknownst to them, the Ghanaian public has maturated, and understands the implications of policies, even better, than some of these “unqualified” politicians who have swamped the centre of power for economic paybacks and kickbacks.

If Mahama was good, why did Ghanaians reject him in 2016? Mahama lost because he was not good enough and Ghanaians will reject him again in 2020. His record of his past enthusiastic misrule, graft, perfidy, corruption and giving away our nation's diamond resources to his brother, Ibrahim Mahama will come back to haunt him. If there are any NDC people out there who are contemplating partnering Mahama, please think and think twice before you sacrificed as a "living Dead Goat"