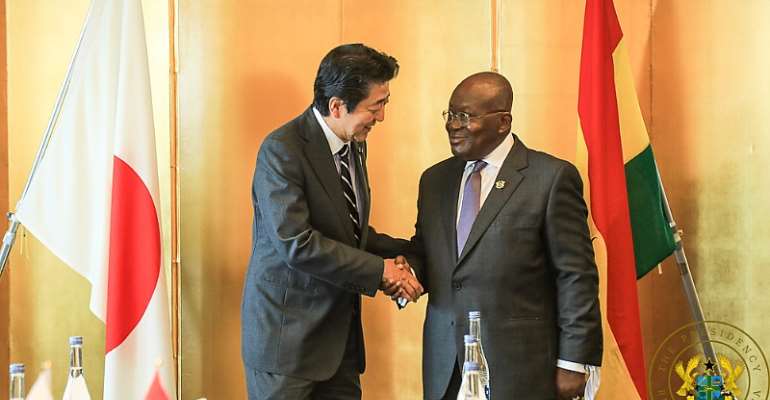 President  Nana Akufo-Addo and the Prime Minister of Japan, Shinzō Abe, have pledged, during their respective tenures of office, to strengthen the ties of friendship and co-operation that exist between Ghana and Japan.

At a meeting between the two leaders on Saturday, 31st August, 2019, after the end of the 7th Tokyo International Conference on African Development (TICAD), Prime Minister Abe noted that Ghana-Japan co-operation has come a long way since the late Dr. Hideyo Noguchi laid the foundation for the development of relations between the two countries.

The signing of a Memorandum of Understanding, on the sidelines of TICAD 7, between the Government of Ghana and the Japan External Trade Organisation (JETRO), for the establishment, in Accra, of a JETRO-Ghana office, according to the Japanese Prime Minister, is further proof of the determination to promote Japanese investment in Ghana.

With the Ghana-Japan Business Council soon to be launched, Prime Minister Abe, again, described it as a welcome initiative which will propel the further mobilisation of Japanese private sector investments to Ghana.

Describing Ghana's healthcare system as a “model on universal health coverage in Africa”, the Japanese Prime Minister assured Ghana of Japan's support towards improving access to healthcare for all Ghanaians.

Touching on President Akufo-Addo's vision of moving Ghana to a situation beyond aid, Prime Minister Abe noted that Japan would continue to support the President’s vision, adding that the training of a number of Ghanaians in Japan would aid in the creation of a large pool of technocrats who, at the end of their training, will come and support the country’s developmental efforts.

He also called for Ghana's support, at the multilateral, to address issues of regional concern, such as the breaching of UN resolutions by North Korea on the testing of missiles, and the alleged abductions of Japanese citizens by North Korea.

Additionally, Prime Minister Abe appealed for Ghana's support for Japan's candidate for election to the International Court of Justice.

On his part, President Akufo-Addo, noted that the warm relations between the two countries continues to improve in several areas of co-operation. 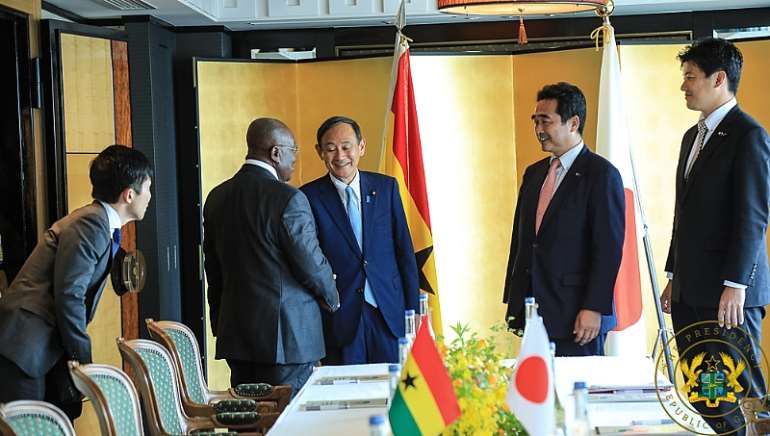 Ghana, the President noted, has made tremendous progress in stabilising her economy, especially during his time as President, and, therefore, he encouraged Japanese investors to take a special interest in Ghana as their gateway to the West African market.

With the coming into force of the Africa Continental Free Trade Area (AfCFTA), and with Ghana selected as host country for the Secretariat, Japanese investors, President Akufo-Addo said, have greater access, from Ghana, to the continent's market of some 1.2 billion people.

“We are embarking on an aggressive public private partnership programme to attract investment in the development of both our road and railway infrastructure. We are, thus, looking forward to Japan's participation in these sectors,” he added.