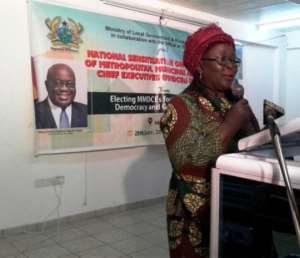 The endeavor to modernize the practice of Democracy and Politics in Ghana through the election of MMDCEs has significant impasse for Parliament to deal with. In fact, Articles 55 (3), 248 (1) and (2), 243 will present a bottleneck for the members of parliament in an attempt to amend the constitution to allow for the elections of MMDCEs finally.

In the light of Articles 55(3) and 248 (1) and (2), the impasse with the election of MMDCEs can easily be solved by amending only article 243. A new statute may further delay the process and the work of Parliament. Essentially, Article 55(3) and 248 (1) and (2) can easily be relied on to aid the Parliament of Ghana to address the legal challenge effortlessly in its determined attempt to achieve a new feat in democracy and politics. These two articles are harmonious to each other and may help to change the nature of how democracy is practised in our Country. Without amending Article 248 (1) and (2) and by simply amending 243 and 55(3), a more open process where interested parties or persons that wish to serve the state in some capacities and lead the Assemblies can file and contest for positions without using Political platforms. Enacting a new law or making a new statute will demand much time, energy and efforts from Members of Parliament.

A lot of work needs to be done on Articles 55(3), 243 as well as 248 (1) and (2). The problem is, the MMDCEs are to represent the President at the sub-national level. In this way, the elected members must work relentlessly to help maintain the aspirations of the President. All MMDCEs will be required to pursue the agenda of the President. As it is the definite resolve of Parliament to allow for the election of the MMDCEs in Ghana, the political affiliations of these members should be a matter of concern. Political parties are seeking the opportunity to represent candidates to contest such elections. Meanwhile, the constitution prohibits such an action. But the overarching goal that the President seeks to achieve in Politics and democracy is appropriate and must be supported. The arguments by some Members of Parliament that people should be allowed to represent parties need much reconsideration. These arguments signify clearly that Articles 55(3), as well as 248(1) and (2), need to be looked at by these Members of Parliament. To the extent that Members of Parliament want political parties’ representation overshadows the ambition of the President.

Simply, the push for parties to represent candidates for these election does not present different ideas to appointing the MMDCEs politically. Though those to be elected might emerge from other parties, it won’t be different from appointments by the President. The likelihood that members from the party in power will win is huge. This is because these elections will not be held at the same time with the national elections. There is an immense advantage to the political party in power to have its members win majority of the votes. To avoid the likely advantage that the party in power will have and be in tune with the vision of the President, the articles outlined in this exposition must be thoroughly examined to identify the means to harmonize the impasses in the law. The constitution does not allow political parties’ representation for grassroots election. With limited knowledge in Constitutional issues, I suggest Parliament amend Article 243 to make its work easier in dealing with legal impasse.