Since 3 years Souleymane Sow has been in action at the Görlitzer Park in Berlin.
By Francis Tawiah 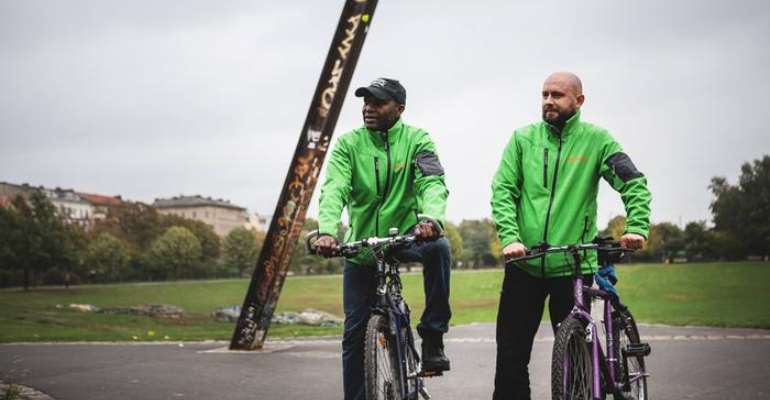 The Görlitzer Park in Berlin is known for its drug dealers, of which mosh of them are come Africans. The police could not solve the problem, now some park users are to provide for peace. Among them is Souleymane Sow from Guinea.

Screams are shouting from a corner of the park, then a dull bang. Souleymane Sow and his two colleagues run off. At the park entrance there is a quarrel: stones fly, a man swings a wooden slat. The three park runners intervene. Two young men don't want to be reassured, the park runners push them in the direction of the exit.

Two North Africans stole from a man who had bought drugs from African dealers, Sow says, "to calm down such situations, you need to have courage. You mustn't show fear, otherwise you can't do this job. You have to be calm and be able to de-escalate."

At home with the stranded

The green park runner T-shirt has only his nickname on it: Solo. That's how he is known here, the Görlitzer Park has been his territory for three years. 14 hectares of greenery in the middle of the Kreuzberg sea of houses. A children's farm, a youth centre, a lot of lawn, but it's Germany's best-known drug trafficking centre. About 200 dealers are supposed to do their business here. Most of them come from Africa, many of them have no valid papers.

There's not much going on this afternoon. Small groups of young Africans hang out in the narrow alley next to the collapsed park wall. Most of them are men between 20 and 30. In the background music from a stereo system. The dealers are grouped by nationality - Gambia, Nigeria, Ghana, Guinea. "We often stay together to have something to eat. Whoever has money buys something for the whole group," says a man with long dreadlocks and mirrored sunglasses. Many people would also sleep here in the park, he says. According to his own statements, he comes from Ghana and has lived here since 2014.

"It's good that there are park runners," he says. "Whenever there's trouble, I run off and tell them. I wouldn't know what to do if they weren't there. Someone like me can't call the police". 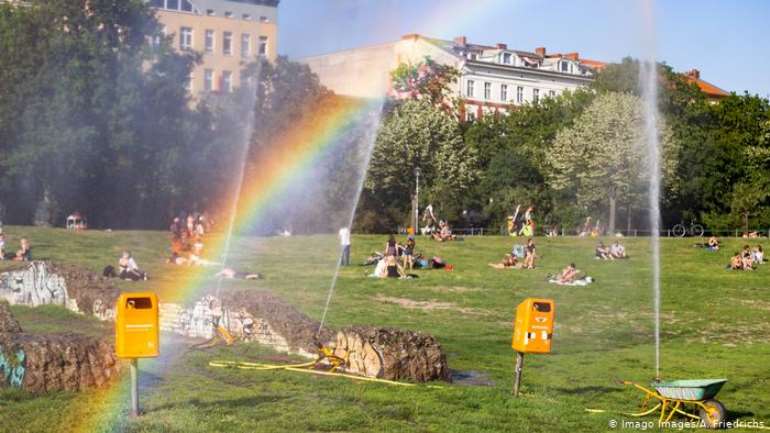 The Görlitzer Park is a green oasis in Berlin-Kreuzberg

With fatherly authority and linguistic talent

Souleymane shakes hands, laughs, jokes. In a friendly way, he tries to enforce at least basic rules: No harassment of other park visitors, no selling drugs to children. No brawls, no thefts. The park runners should ensure that everyone feels comfortable in the park.

Helpful: a good dose of paternal authority, his own story and talent for languages. The West African languages Mandinka, Susu, Fulfulde, Bambara and Malinke, plus French, English, German and Polish. Almost 30 years ago, the 46-year-old came to Berlin with a big dream.

"I thought I would come here and have a better life from the very first moment," he says. But the dream burst: the hoped for studies turned into nothing. At first, he worked black to make ends meet. On the construction site, as a furniture remover, and also as a security guard, he made it through.

Back to the hard hand?

The dealers also know his story. He tells them deliberately. "What I'm trying to convey here is that the boys shouldn't hang their heads but have courage. I made it, they'll make it someday," he says as he sits on top of the concrete terraces at the northern tip of the park after his round.

It's a little idyll from up here. Children cycle along the gravel path in the middle, young Kreuzberger sunbathe their naked upper bodies and enjoy an early beer after work. But the numbers speak a different language. According to the ARD magazine "Kontraste", the number of serious bodily injuries from January to April of this year has risen by 50 percent compared to the previous year, the number of robberies by 31 percent. At night, many no longer dare to go to the park.

Some politicians and media therefore demand a different strategy: more police operations, more arrests, more deportations. The authorities have already tried this for three years. In 2017 they stopped the so-called zero tolerance strategy. Critics consider it a failure - the drug trade shifted to other corners, and for every arrested dealer another one quickly moved up. And now the new edition?

Souleymane Sow make such proposals rage. "It's not a solution for me," he says and for the first time this afternoon an angry undertone resonates in his voice. "One solution would be to help people integrate here, find work, find training places, learn the language. You have to give them a chance."

But only very few get them. Those who are likely to stay in Germany. Two dealers with the appropriate papers he has obtained legal jobs. He was able to place others in language courses. But most of them are illegal in Germany. They would have to live in the EU countries which they entered first on their flight. This is what the EU rules want but not to change in sight. Quite wrong, Sow says: "These people are here, we have to help them to find the right way".