In post-Bashir Sudan, change comes in many guises 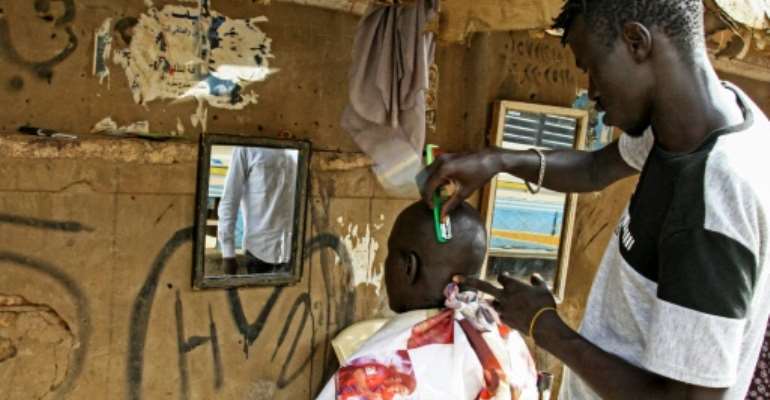 Young men are flocking to barbershops in Khartoum for modern hairstyles once banned under Omar al-Bashir's regime. By Ebrahim HAMID (AFP/File)

Earlier this year, hairdresser Mazen Kamal was stopped by paramilitary forces on a street in Khartoum for having long hair and was shaved on the spot.

Now the barbershop he works in is seeing an influx of young men coming for modern hairstyles that would have incurred the same punishment under the now ousted and jailed Sudanese leader Omar al-Bashir.

The Islamist general is on trial for corruption and his conservative regime came crashing down after a wave of protests that started last year over the economic situation in the country.

The democratic transition is nascent, but many young people are wasting no time in taking advantage of the regime change to exercise personal freedoms.

"How I wished at that moment that we could topple (Bashir's) regime," Kamal says.

"I didn't think it was possible. I gave up that day. They beat me on the street as people watched."

The sense of freedom sweeping Sudan's capital since the protests has broken decades-old shackles and, at least temporarily, led to an easing of Islamic policing.

"I always used to wear a cap to hide my hair when I walked on the street," Kamal says.

"I was afraid, but now our lives are better."

Talking in his barbershop, Kamal gives his friend Mohamed al-Fateh a haircut known locally as "a Wi-Fi" for the three lines shaved around the sides and back of the head.

"You couldn't have your own style under the old regime; there were a couple of different cuts for everyone," says Fateh, a student who also works part-time in the barbershop.

As Kamal's clipper carves a line above his temple, Fateh rolls his sleeve up to reveal the scar left by a bullet during protests in June.

Under Bashir's regime, women were regularly sentenced to lashes for wearing trousers. By Ebrahim HAMID (AFP/File)

"At the beginning, the protests were mainly about the economic situation -- life was hard for everybody. But we were also in the street for freedom," Fateh says.

Curbs on sartorial freedom were also harsh on women, with security forces often adopting a hardline interpretation of the penal code ban on "indecent outfits".

Women have been sentenced to lashes for wearing trousers on many occasions, in line with the sharia Islamic law Bashir imposed after taking power in a 1989 coup.

But now, the sight of young women wearing jeans outside Khartoum University or even smoking a water pipe on cafe terraces is not uncommon.

Even men had to smoke shisha in secret during what many Sudanese now call "the old days".

Shisha smokers can now enjoy their hubbly-bubbly without fear of arrest in cafes in Khartoum. By Ebrahim HAMID (AFP/File)

In the old quarter of Khartoum, Mohamed Ahmed Badawi and his friends used to gather to smoke on the first floor of a clandestine shisha cafe.

"We would have to inform the cafe owner before coming. We would enter very carefully and lock the door behind us," says Badawi, an engineer in his late 30s.

"When we heard the police starting to smash the lock, we had seconds to sidle along this ledge here and escape from the roof," he says, pointing to an outdoor staircase.

In the dimly-lit cafe, patrons -- a mixed crowd of artists, engineers and civil servants -- can now draw on their hubbly-bubbly without fear of arrest.

A mile up the bank of the Nile, fashion and leisure -- or even freedom of speech -- are distant considerations for Samya Siddik, who is raising three children alone.

The most tangible change that Sudan's revolution against Bashir brought for her is the right to earn a living by selling tea on the street.

"My husband is dead and I have children to feed," she said, as she boils a pot of water behind her makeshift tea station.

Several other women have set up their small tea businesses across this large open space, where mostly young men come to cool off in the evening, sitting in groups on brightly-coloured plastic chairs.

"The police banned this sort of thing last year. They said it was against public order. They would raid us and confiscate all our equipment," says Siddik.

Curbs on sartorial freedom were harsh on women under Bashir, with security forces often adopting a hardline interpretation of the penal code ban on "indecent outfits". By Menna ZAKI (AFP/File)

The tea sellers were asked to get licenses they could not afford, as well as expensive medical tests proving they were free of contagious diseases.

Underlying the crackdown on tea sellers, many of whom were displaced from conflict-torn parts of the country, was the assumption they were involved in prostitution.

"My whole life depends on this work, I have to pay for the rent and for food," says Siddik.

"And when I'm out of a job, my children are out of school."

The 37-year-old did not take part in the protests that brought down Bashir and she admits to not following the country's political developments closely.

"I started to work again, this is the change I know."