"They Had A Big Problem There"...Trump Twitters Intelligence Photo Of Iranian Missile Launch-Station 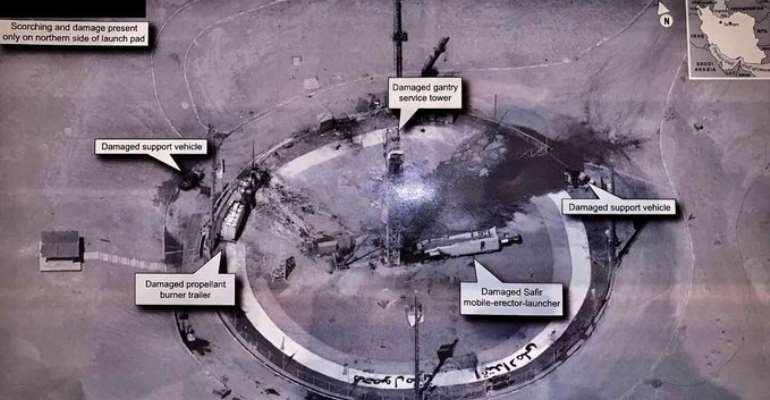 Failed missile launch? This photo of the Khomeini Space Center in Northern Iran was published by US President Trump on Twitter.

Such a detailed satellite image is rarely seen

Has US President Trump unintentionally revealed the capabilities of his secret services? A photo from Iran he published on Twitter irritates experts.

After an alleged failed missile launch in Iran

US President Donald Trump denied that his country was involved in the incident. Trump wrote on Twitter that the US was not involved in the "catastrophic accident during the final launch preparations" of a "safir-missile" on the launch pad in the northern Iranian city of Semnan. But now Trump is being accused of publishing secret information.

The British "Guardian", referring to intelligence experts, reports that Trump may have unintentionally revealed how highly developed US satellite technology has become with the pin-sharp detail photo. Another possibility is that a fighter jet took the picture during the overflight - which is also interesting information for enemy secret services.

"The publication of this photo does not seem to be in line with the usual US policy of dealing with such information," writes satellite imaging expert Allison Puccioni of Stanford University, for example. "I do not know what the political objective of the publication is. Images of this quality are not publicly accessible. The last time a US government showed such detailed satellite images was to propagandistically prepare for the Iraq war of 2003.

Publicly available satellite photos from Iran show the suspected explosion of a missile on its launch platform. Tehran did not comment on the incident. Iran repeatedly asserts that its missile tests served only civil space travel. Since space rockets can potentially also be used for military purposes, the USA keeps a close eye on Iranian activities.

In recent months, the dispute between the USA and Iran has increased fears of a new war in the Gulf. Trump had terminated the international nuclear agreement with Iran in May 2018. Since its withdrawal, Washington has imposed a series of new sanctions against Tehran. Iran responded by increasing its uranium enrichment. The European states are still trying to save the nuclear agreement.

The author has 666 publications published on Modern Ghana.