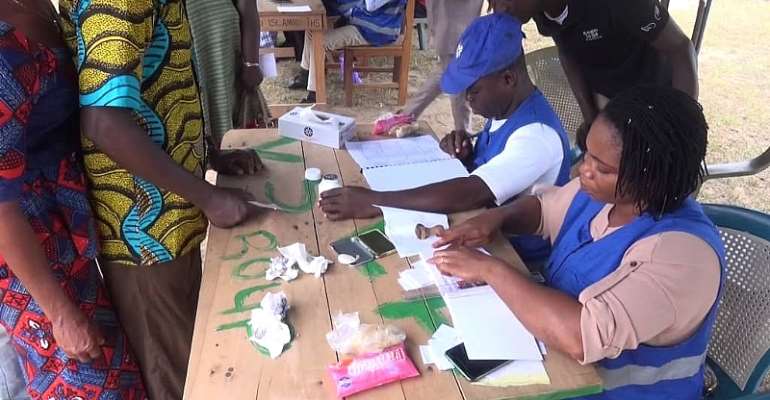 The incumbent Member of Parliament (MP) for Ellembelle Constituency of Western Region Emmanuel Armah Kofi-Buah, who is seeking re-election in the NDC's parliamentary primaries is likely to secure majority of votes cast at the two polling stations across the Constituency.

Ellembelle Constituency has a total of 118 polling stations and has been divided into zones. Seven zones are voting at Kamgbunli and one zone is also voting at Asomase in the northern part of the Constituency.

The incumbent MP for Ellembelle Constituency Emmanuel Armah Kofi-Buah is being contested for the first time since 2007 by a Branch Chairman of the party Miezah Mea-Alleah from Nkroful.

The elections today (Saturday, August 31, 2919) will electrify the constituency which has been controlled by the NDC for over a decade.

Majority of delegates who voted in the exit polls confirmed they voted for the incumbent MP Emmanuel Armah Kofi-Buah.

When questioned on their decision to vote for the incumbent MP, they revealed that he is the only candidate who can beat the NPP again in the 2020 parliamentary elections.

Per the exit poll, Kofi Buah is likely to win 95% of the votes because so far 815 delegates claim to have voted for him.

Speaking to the incumbent Member of Parliament who was the Petroleum Minister under the John Mahama-led administration, Emmanuel Armah Kofi-Buah, he said he is winning the primaries with a huge margin.

He, therefore seized the opportunity to advise his supporters to celebrate in moderation.

He also said his main focus is to work hard and retain the seat in 2020 and also help former President John Mahama to beat the NPP to win the presidential seat.

The incumbent MP was accompanied by the late afternoon political talkshow host of Power FM in Accra, Mugabe Maase to cast his vote.

Mugabe Maase is in the Constituency to help Emmanuel Armah Kofi-Buah to be re-elected.

The security aspect is very tight and so the process has so far been witnessed with violent free activities.

The opposition party held its parliamentary primaries in 157 constituencies last week Saturday without Ellembelle. This is because, the Vetting Committee had disqualified Miezah Mea-Alleah, one of the candidates contesting the incumbent MP Emmanuel Armah Kofi Buah.

The aspirant however was later cleared by the Functional Executive Committee of the party to contest the elections.

But, Assin South, Mfantsiman in Central Region and Fanteakwa North in Eastern Region are also having their elections simultaneously with Ellembelle constituency due to similar issues .