Fire In Brazil, The World In Trouble 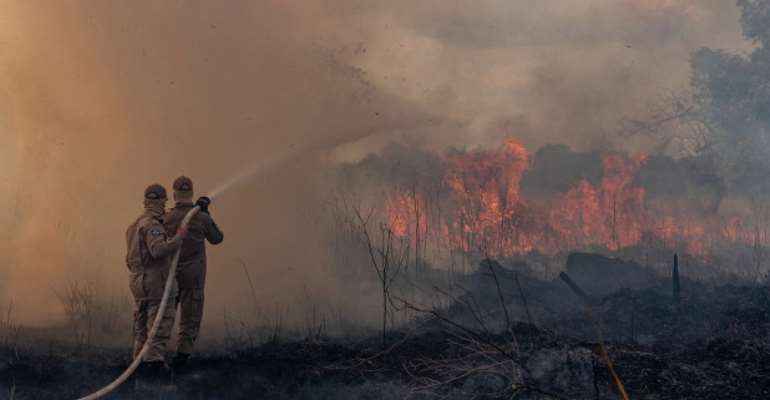 A commentary on the raging fire in the Amazonian region of Brazil and beyond is likely going to attract a 'and so what?' snide remark from some of our compatriots.

Those who shrug the subject in this fashion are probably ignorant about how the whole world as a planet is intertwined through common factors which affect weather patterns, therefore, impacting our food production among others.

Combining science and religion in such matters help us to appreciate the wonders of creation. Until the start of the Brazilian fires made international headlines, many did not know that the dense foliage represented by the Amazon in Brazil servesas part of the lungs of the world providing 20% of the world's requirement of oxygen, according to relevant experts.

As the factory as it were for oxygen, the Amazon rich in fauna and flora absorbs carbon dioxide and produces the former.

The lesson to be learnt from the foregone is that whatever we do in our corner of the world impacts on the state of the world's health positive or negatively depending on what we do.

The subject of global warming is no longer an abstract subject confined to the chapters of academic text books but a reality which we ignore at our peril.

Have we bothered to find out why the rains in the past few years have not fallen as they used to do in some parts of the country? Don't we realize that there have been massive changes to the weather over the years? The herring season is no longer here and we are not prompted about something gone amiss?

Deforestation is still going on in the Savannah belt of the country as trees are felled to meet the energy requirement of both rural and urban folks. The efforts to make the use of liquefied petroleum gas or LPG, the most preferred in homes across the country, although encouraging, is yet to peak to a stage where the remaining trees would be spared the chainsaws and other implements of their destruction.

It is important that the subject of climate change is brought to the front burner locally and not left to only the developed world to discuss and handle. Being part of the world and, of course, suffering the shortcomings occasioned by our reckless relationship with the environment, we must be concerned about the raging fires of the Amazon as much as we must with the felling of trees in the Savannah and our threatened tropical rainforest.

If the forests of Brazil provide a certain percentage of the world's oxygen, it stands to reason that our forest cover in Ghana as well as Ivory Coast and even Nigeria all must join the rest of the world as one village to protect our environment.

It is not for nothing that France and others are set on providing millions of dollars to Brazil to stop the fires and protect the Amazon.

Providing the necessary education about protecting the environment should start from our basic schools and the time to do so is now before it is too late. The environmental degradation occasioned by the fires in Brazil and the felling of trees in Ghana among other negative human practices in a global village is said to be nearing an irreversible stage, the precipice.