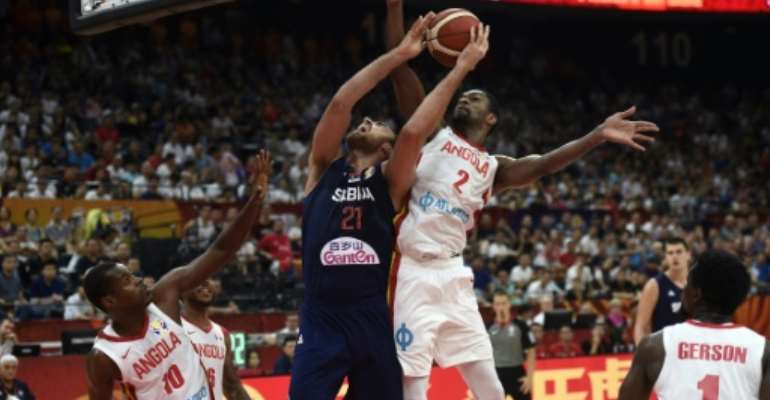 Serbia were ruthless in their World Cup opener against Angola. By Ye Aung Thu (AFP)

Strongly fancied Serbia made a ruthless start to their Basketball World Cup title bid, thrashing Angola 105-59 in the opening match of the tournament in China on Saturday.

The United States are the two-time defending champions but are missing their biggest stars and some believe Serbia can snatch the Americans' long-held crown.

Serbia were strong favourites against Angola in the southern city of Foshan and wasted no time stamping their mark on the 32-team World Cup.

The United States, who have named a young side, open their defence on Sunday in Shanghai against the Czech Republic.

The Americans are without the likes of LeBron James, but Serbian coach Sasha Djordjevic said that Gregg Popovich's team -- who are still packed with NBA talent -- remain the side to beat in China.

"I am not thinking about the USA team," Djordjevic said. "I do respect them, I think they are the biggest favourites."

"They don't have some of the players but they still have a great, great team with great players, great coach."

Nikola Jokic, the lumbering Denver Nuggets All-Star who is key to Serbia's chances, brought up 100 points with a free throw on the way to him racking up 14 points.

Serbia were comfortably ahead 50-32 at half-time and rammed home their handsome advantage in the second period against the outclassed Africans.

"It's our trademark all these years -- playing together, we like to share the ball, we like to pass, we have a lot of guys who are not selfish.

"This is really great for a coach, I'm proud when I see that, it's the trademark of Serbian basketball."

In other early matches, Russia edged Nigeria -- touted as a possible surprise-package -- in a thriller in Group B.

Russia led at half-time, only for Nigeria to surge level at the end of the third quarter.

The Africans were in the ascendancy and led early in the fourth, but the Russians stormed back and they were tied 75-75 with less than a minute left.

But it was the Russians who held their nerve, grabbing victory 82-77 after a tense final few seconds.

Hosts China were to start their title bid later Saturday against Ivory Coast in the capital Beijing.