Gov’t Will Equip Police Officers To Increase Their Protection – Bawumia 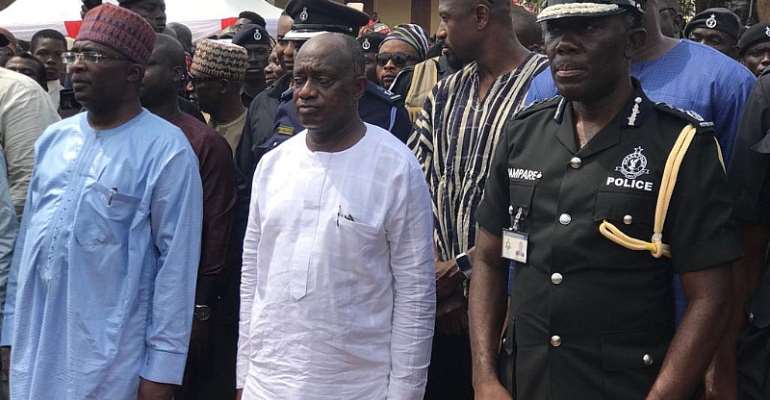 He made this statement at Abuakwa in the Ashanti region while speaking at the funeral grounds of Lance Corporal Mohammed Awal, one of the officers killed at Kasoa Buduburam in the Central Region.

He also expressed confidence in the police to make the perpetrators of the dastardly act to face the law.

“These gallant men will forever be remembered for their acts of sacrifice for the nation. Any life lost is a life too much. I have full confidence in the IGP and his men to work hard to bring the perpetrators of this dastardly act to book. We are going to go after the attackers. In this particular case, three persons were arrested a few hours after the incident and one of the suspects is on the run.”

Their murder brings to five the number of murdered officers within a month with the others being Sargeant Agatha Nabin, Lance Corporal Alhassan Asare and Corporal Bernard Antwi.

But, Dr. Bawumia said such acts of indiscipline cannot continue, hence government will deploy all means to get the police service equipped to also protect the citizenry.

“This issue is a security matter and should not be politicized. The government will continue to ensure the Police is well resourced. 4500 bulletproof vests have been delivered to the Police to help stem these unfortunate incidents. I urge police officers to wear the bulletproof vests and not say that they are uncomfortable to wear. Other logistical items have been delivered to the Police including non-lethal weapons. The government will continue to support the Police and more logistics will be delivered soon. We must protect our police for them to be able to protect us.”

MTTD officers to be armed

The recent trend of criminals targeting unarmed police officers has compelled the Interior Minister, Ambrose Dery to direct the Acting Inspector General of Police, to provide arms and other protective gears for personnel of the MTTD.

“The police will be provided with bulletproof equipment, vests and helmets to enable the police to exercise their right to self-defence effectively. So, the directive is that from now we would make sure that our police on traffic duties are armed. Not only should they defend themselves but they must be equipped to deal with violent crimes when it comes their way. The IGP has been ordered now and I know he is going to do a good job to make sure that what happened to the police officers do not happen to other police who are on traffic duty”, he said.