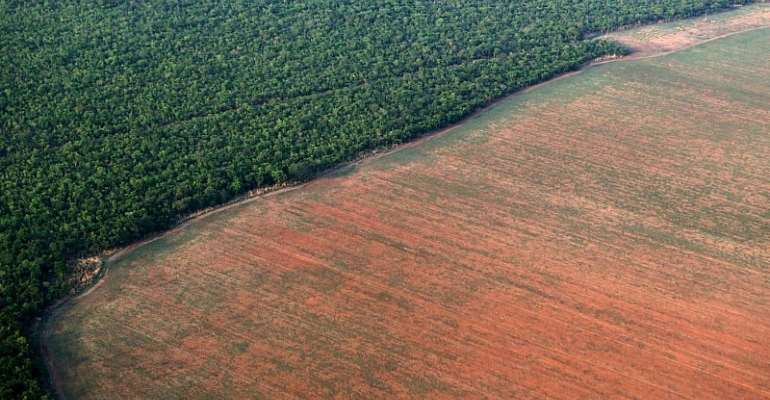 As wildfires rage in the Amazon, some are saying we should look at our plates, as French soy consumption is driving the push towards deforestation. French President Emmanuel Macron agrees. French meat is fed imported soy, most of it from Brazil.

You could say that a French chicken, on a cellular level, is partially Brazilian. French farmers import vegetable protein, mostly soya, to feed their livestock

In the 2017/2018 growing season, France imported 63 per cent of its soya-meal from Brazil, nearly all of that for animal feed.

Brazil is the world's second biggest soya exporter, after the United States, and much of that soya is grown on clear-cut land, Amazon rainforest that has been cleared by fire to use for growing soya and raising beef cattle.

"You have deforestation caused by these commodities… and it winds up in Europe,” explains Etelle Higonnet, senior campaign director for Mighty Earth, which published a report in 2018 about the environmental impact on the Amazon of French and European meat and dairy.

Most imported soya from Brazil is genetically modified, which is allowed in Europe, which only prohibits growing GMO crops on its soil. And it goes to animal feed.

“Three quarters of the world's soya gets fed to animals,” says Higonnet. “It's meat eaters who are indirectly the ones consuming the majority of soy.”

Protein sovereignty
This does not mean there is a push towards vegetarianism, despite a UN climate report that said reducing meat consumption in developed countries is key to reducing CO2 emissions.

Instead, France is focusing on where plant protein is produced. At the G7 summit this week, when he raised the alert about the increased numbers of fires in Brazil's Amazon, President Emmanuel Macron evoked the idea of European “protein sovereignty”.

Europe needs soya to feed its animals, “and we have none,” said Macron.

In an interview on French public television on Monday, he said France was "complicit" in the current problems in the Amazon, with its dependence on Brazilian soy.

France imports nearly half of its vegetable protein needs (46 per cent in 2015/2016) to feed livestock. The EU imports over 70 percent of its needs.

In February, the French agriculture minister, Didier Guillaume, opened a dialogue with farmers and others in the sector to come up with a “protein plan” for France, to reduce its dependence on imports.

But Higonnet of Mighty Earth, warns that increasing production of sunflower, colza and other vegetable protein is not the solution for France or Europe.

“It's fine to try to grow your own stuff as much as possible. But let's be real: the European Union would pretty much have to turn itself completely into colza [or sunflower] in order to completely substitute out harmful soya from Latin America. And that's not realistic,” she told RFI.

“The true solution that would benefit everybody worldwide… is to fix deforestation where it lives. We can grow soy and beef with no deforestation.”

Deforestation-free commodities
Since 2006, after a campaign lead by Greenpeace, the Brazilian government, farmers and traders agreed to a Soya Moratorium, which would ensure that traders did not purchase soya grown in the Amazon on land deforested after 2008. The moratorium lead to a sharp drop in deforestation in Brazil.

For environmental activists, like Higonnet, this is evidence that solutions exist: “What we need is France and Europe to demand deforestation-free commodities, and change the whole market.”

While the Soy Moratorium worked, the beef industry has not followed suit. Continued deforestation is aimed to clear land to raise cattle, as demand increases, notably from China.

Current government policies, under new president Jair Bolsonaro, are shifting away from preservation, which may explain the sharp increase in fires in the Amazon this year.

The European Union is considering using the newly-signed Mercosur trade deal to pressure change. The trade deal between Europe and Latin American countries, including Brazil, must still be ratified by all the countries.

This week the French presidency warned that it might not sign the deal as it is, without additional environmental safeguards.

For Higonnet, this is key to changing policies in Brazil, as is consumer pressure, as people start demanding meat and dairy that comes from animals raised on soy that has not contributed to deforestation.

“In a deep way, French people eating meat, eating dairy… European consumers have the power to change what's happening in the Amazon.”