Children on front line of fight to stop spread of Ebola 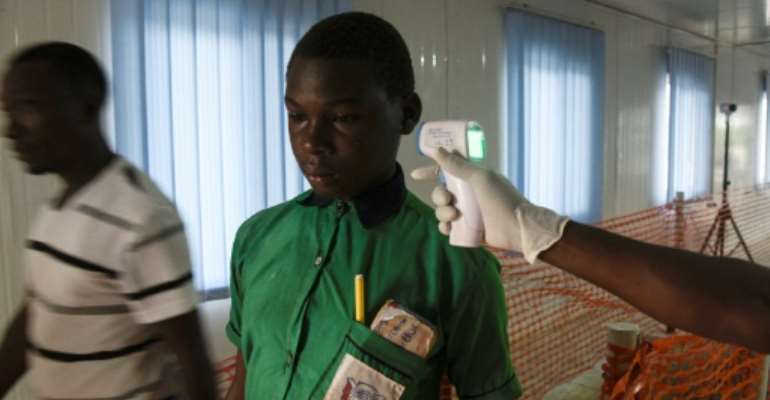 A health official checks the temperature of a boy from Uganda on his way to school in Uganda. The daily inspections at the border are a safeguard against Ebola. By ISAAC KASAMANI (AFP)

Before dawn, Congolese teenager Doneka Kabowo sets off for school in Uganda, negotiating miles of jungle, the threat of armed militias and an international border to reach her classroom.

Every weekday morning, yet another obstacle stands in the way of 15-year-old Kabowo and hundreds of other boys and girls from the Democratic Republic of Congo on their way to school in Uganda. They must undergo daily health checks for Ebola.

"It's tiring, but we're getting used to it. It is to stop Ebola from crossing over," Samuel Baini, another 15-year-old student, told AFP after his health check at Mpondwe, the busiest crossing point between Uganda and the DR Congo.

Ugandans, fearing the deadly virus could breach the porous border, are taking no chances.

The girl is the fourth victim diagnosed with Ebola in Uganda to have died from the haemorrhagic fever.

In June, three members of a single family tested positive for Ebola in Uganda after entering from DR Congo. Two died in Uganda, while the third succumbed to the disease after returning to DR Congo.

Up to 18,000 people make the journey every day between eastern DR Congo -- the epicentre of the Ebola outbreak -- and Uganda, according to government figures.

All must be methodically screened at the border to ensure they are free of the virus. Temperatures are taken and hands disinfected. Anyone recording a fever is kept for additional checks.

Among the travellers between the neighbouring countries are thousands of school children making the journey alone.

Their parents send them from remote and poor villages thousands of miles from the DRC capital Kinshasa, to Uganda, where job and educational opportunities are greater, and cultural and family ties strong.

The children can be seen running towards Mpondwe early every morning, some barefoot and in tattered uniforms as they join the rush.

Pupils from Congolese villages must sometimes rush through the Mponwe border point with Uganda, trying to get to school on time despite lengthy Ebola health checks. By ISAAC KASAMANI (AFP/File)

Younger children are helped by older students to line up as health workers in gloves, face masks and goggles check temperatures and instruct them to lather hands with sterilising wash.

Most of the children are already accustomed to the procedure.

"The smell of the chemicals used in the water takes a long time to go away," she added, referring to the precautionary chlorine wash all travellers undergo when passing through Mpondwe.

However, children were also using unofficial routes into Uganda until warned of the consequences, said Rajab Kasero Bezza, director of studies at the government-run Nyabugando primary school.

"We told them unless they get checked for Ebola they would lose their opportunity to get an education," he told AFP.

The World Health Organization (WHO) declared Uganda free of the disease in late July but the latest positive case underscores the challenge of containing the virus in DR Congo.

The death toll from the outbreak there -- the second worse Ebola epidemic in history -- has risen to more than 2,000.

The virus also recently spread to another province further south that shares a land border with Rwanda and Burundi.

Screening is vital, but imperfect.

Ebola can take up to three weeks to incubate and cannot be spread until the infected person has symptoms, the WHO says. But it can be difficult to clinically tell Ebola from malaria, typhoid fever or meningitis.

Francis Tumwine, an International Committee of the Red Cross worker at Mpondwe, said creating public awareness of the disease was critically important to quashing the rumours around it.

"The fear of Congolese children bringing Ebola into schools was very real," he told AFP.

"But we taught people about the virus, and they now know what to do."

At Nyabugando school, where around 100 students come and go from Congo every day, teachers and health workers have been combating stigma around Ebola and educating the wider community about the realities of the disease.

Ugandan parents initially feared their children could catch the virus from Congolese playmates, not understanding how transmission occurred, Bezza said.

"In the beginning, there was a negative attitude towards children from DRC... but this has changed," said Bezza.

Doctor Baseka, the director of health services in Kasese, said the Congolese children had become ambassadors of change, helping quash myths about Ebola back in their home communities.

"People there thought Ebola was witchcraft. But now their children are learning from our Ebola awareness teams at school that the disease is real and deadly, a message they pass on to their parents," he told AFP.

"We have seen behavioural change."