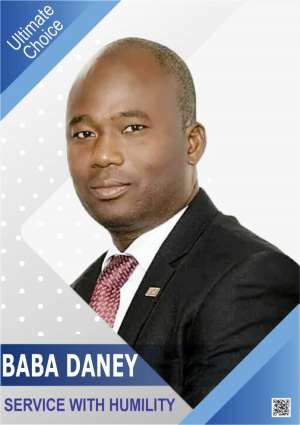 An Aspiring Parliamentary Candidate in the Yendi Constituency, Alhaji Baba Daney has told *The Voiceless Media* in an interview that he has always remained faithful to the Yendi constituency and highly hopeful that this will earn him the Candidature of the NPP for election 2020.

Alhaji Daney who is a Chartered Accountant by profession, currently heads the finance department at the Northern Regional Coordinating Council.

The Parliamentary Aspirant who is popularly known as " The Home Boy" is said to be in active touch with Yendi virtually always and that is what has earned him the name.

Among some of the achievements of the aspirant in both the present and the past in the Yendi Constituency include but not limited to the following:

He has set up the first ever local radio station in the Yendi Constituency with the aim of educating, informing and entertaining the Yendi people on issues that will be of benefit to them. The name of the radio is Dasuma Radio.

The setting up of the radio station has also served as a source of employment for the people of the Yendi Constituency and brought to the area lots of excitement.

Secondly, he has identified some elders of the NPP in the Yendi Constituency who over the years have suffered towards the development of the party in Yendi and offering them monthly financial support. This the Elders are very much grateful for.

Through the instrumentality of the aspirant, 6 natives of Yendi were given appointment with the Rapid Bus Transit where they are working presently and taking care of their families.

This programme was done without recourse to political party coloration.

About 600 farmers were assisted with one acre ploughing in 2018 and 2019 by the aspirant as a way of improving Agricultural activities in the Yendi Municipality.

The *Voiceless Media* gathered that the Parliamentary Aspirant further secured jobs at the Ghana Education Service, Afforestation, Sanitation, NABCO, Community Policing the Audit Service among other places for the youth of the Yendi Constituency aimed at empowering them for the benefit of society.

Alhaji Daney was the first in Yendi according to his naration to have set up what was known as Communications Centre in Yendi to serve the communication needs of the people and to also create employment in the area in the past.

The Aspirant boasted that he was the only Aspiring Parliamentary Candidate who has voted in the Yendi Constituency consistently since 1992.

He collated the results of the NPP in Yendi during the 2008 Presidential and Parliamentary elections something he is very proud of.

He also once Served as a Polling Station Agent at Zohe West Electoral Area from 1996 to 2004 during which period he exhibited high political organisational skills for the betterment of the Polling Station.

The Parliamentary Aspirant also released his Nissan Hard Body Pick Up vehicle for the party in 2016 to aid movements of the campaign team in Yendi.

Alhaji Baba Daney also supported the Nanton, Mion and Gushegu constituencies in the 2016 elections with some logistics.

As a result of dedicated service to the party over the years, he received citations from the Regional and National levels to this effect.

Alhaji Baba Daney believes that having voted in the Yendi Constituency since 1992, served the party from the Polling Station level and always available for the party in both logistical and monetary support over the years will give him victory at the primaries.

We will bring further updates on the achievements of Alhaji Baba Daney to both our readers and the Yendi constituents. Stay tuned.